With clothing styles influenced by the decade’s music, movies, and TV shows, the 80s is one of the most popular decades of fashion creativity.

Known as the birthplace of power dressing to punk rock, the 80s fashion decade was a melting pot of some of the most unique and experimental clothing styles.

In this article, we’ll travel back in time to explore the most popular 80s fashion looks that have stood the test of time and continue to inspire modern fashionistas.

From bold clothes in iconic neon colors and beloved acid-wash denim, these are the most popular 80s fashion styles that defined the 1980s.

So, whether you’re an 80s fashion enthusiast or just curious about past stylistic trends, this article is a must-read!

Bold and masculine cuts characterized the 80s women’s “power dressing” style, as encapsulated by Rebecca Arnold in her book “Fashion, Desire, and Anxiety: Image and Morality in the 20th Century.”

“Power dressing was a way for women to express their newfound authority and to signal to the world that they were no longer to be underestimated.”

“Power dressing” resulted following the feminist movements of the 70s as means for women to navigate the patriarchal structures of the workplace by using the same symbols of power and authority that men had traditionally used to signal their status. 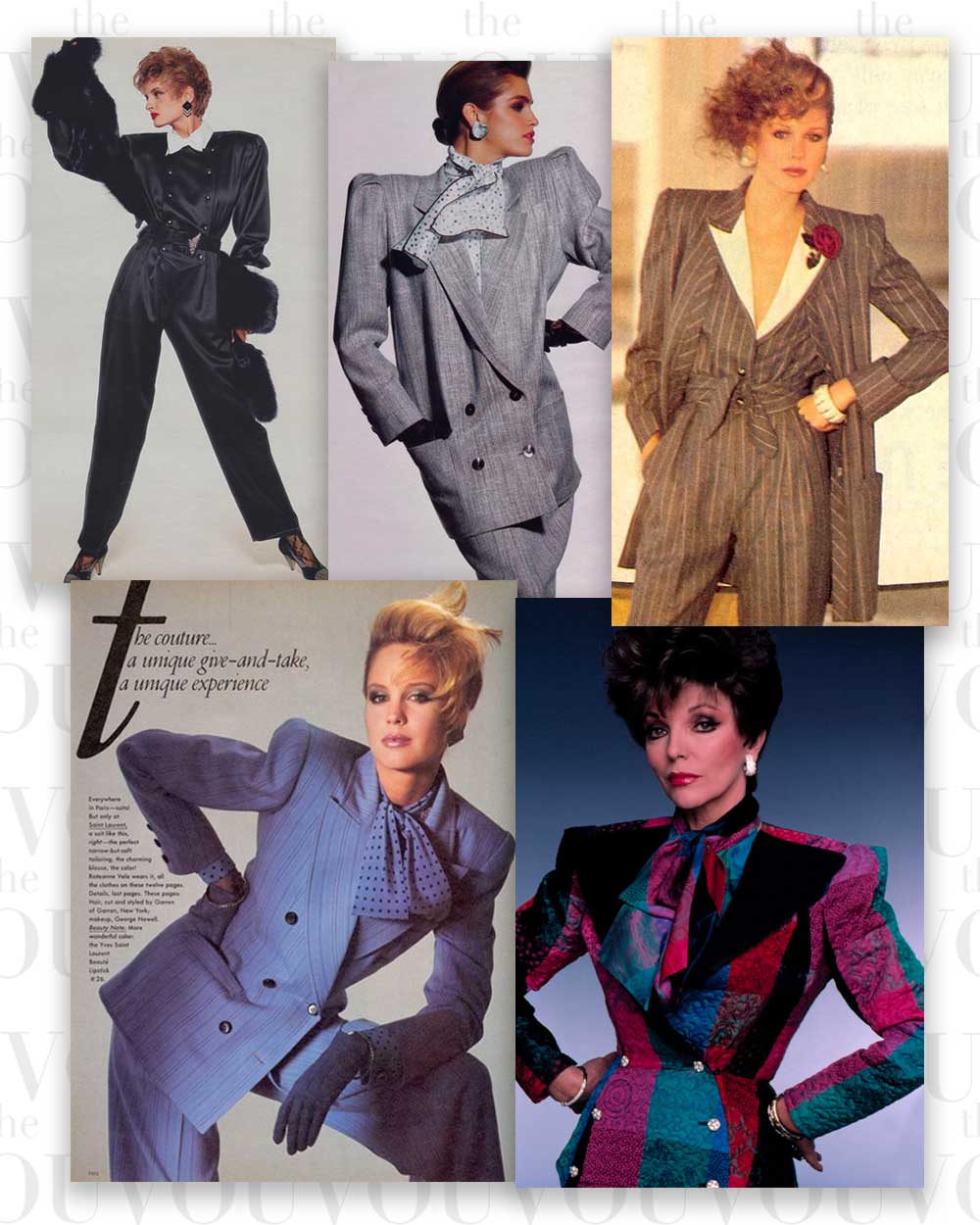 One of the most acclaimed “power-dressing” representatives is Evelyn Lauder, Senior Corporate Vice President of the Estée Lauder Companies, for wearing tailored suits and statement jewelry in the 80s.

To exude confidence and professionalism, the look included blazers with oversized shoulders, man-styled trousers, and many bold accessories, such as men’s watches and statement jewelry.

Moreover, according to Jeong-Mee Kim’s 2011 paper, “A Study on the Power Suit Style,” the trend was fuelled by a societal shift towards gender equality and ending traditional gender roles.

Characterized by a bleached and distressed look achieved through pumice stones and chlorine, acid-wash denim was a popular 80s fashion trend.

Popularized by the punk and new-wave subcultures of the decade, the acid-wash denim look was seen as an edgy, rebellious fashion statement. 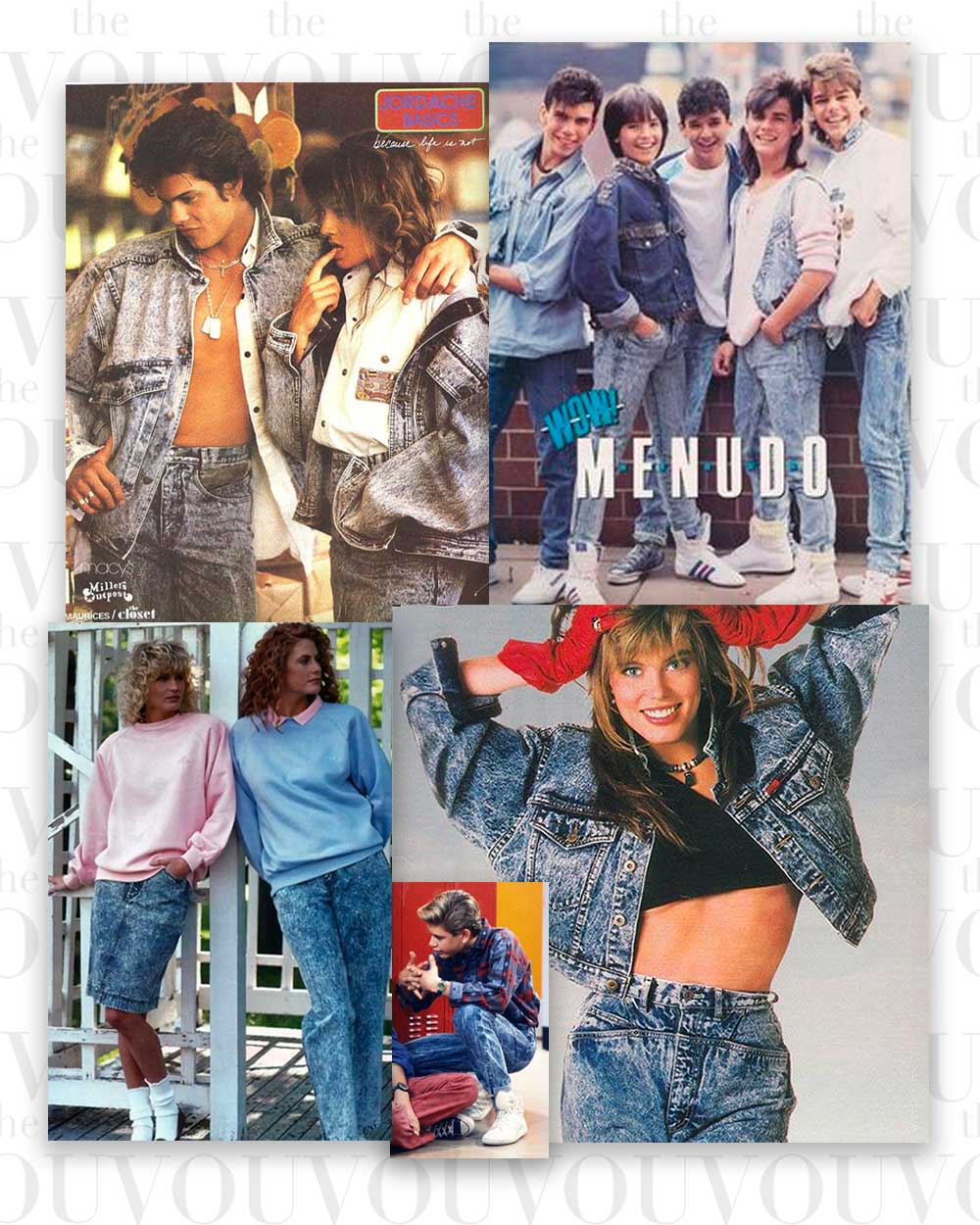 In her 2008 book, “Winner Takes All: Steve Wynn, Kirk Kerkorian, Gary Loveman, and the Race to Own Las Vegas,” Christina Binkley state:

“In the 80s’ acid-washed denim was the uniform of the moment, favored by punks, rockers, and new wavers alike.”

Joanne Finkelstein shares the same view in her book “The Fashioned Self” explaining that:

“acid-wash denim was a key symbol of 1980s youth subculture and fashion.”

And while Ralph Lauren is credited for introducing preppy and all-American fashion styles, only a few know that the American designer popularized acid-wash denim in many of his 80s collections.

The use of bright, fluorescent, and neon-like colors in clothing and accessories was another huge 80s fashion trend.

Popularized by the 80s pop culture, including music, movies, and television, the aim was to create a rebellious yet playful statement. 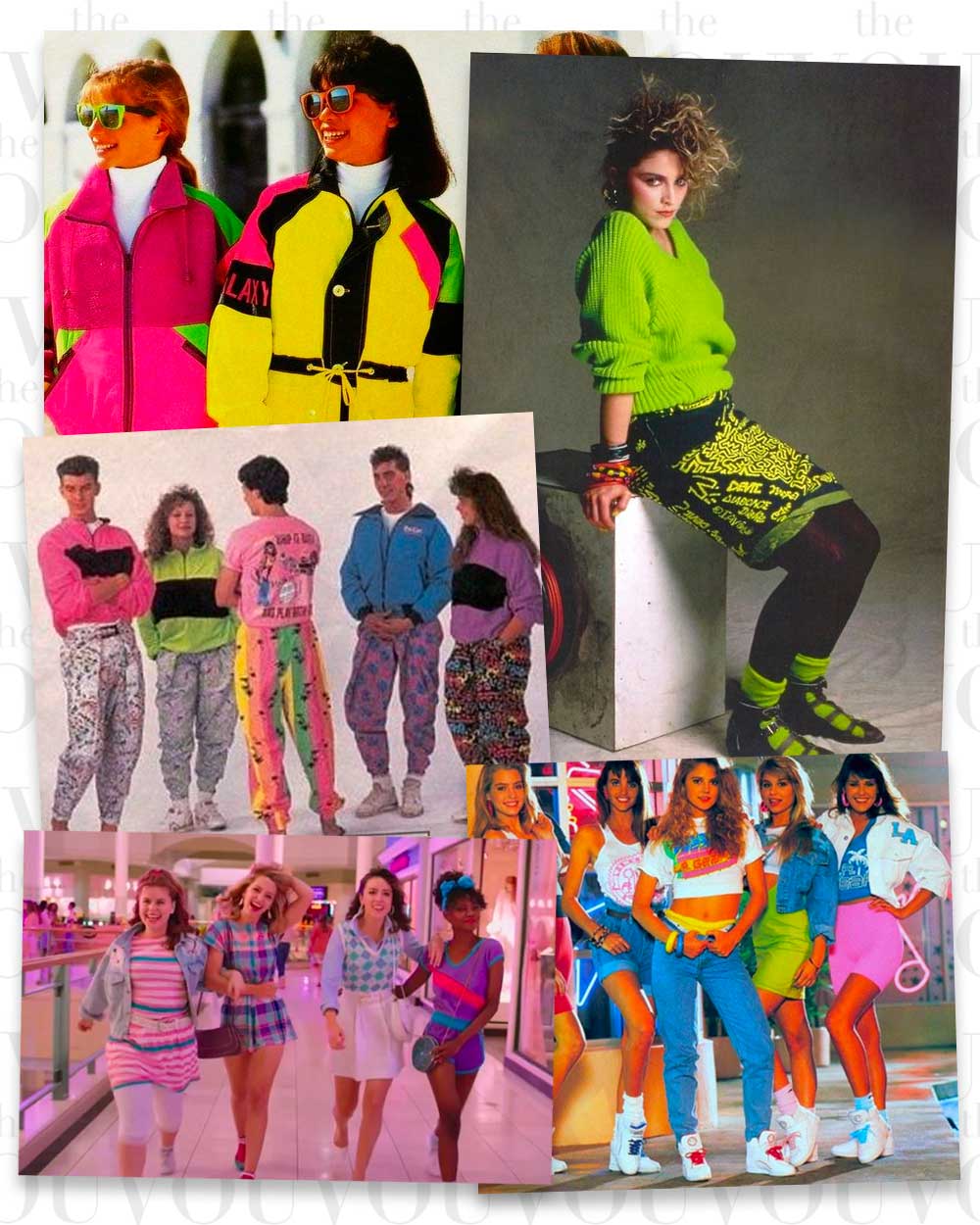 Betsey Johnson, a notable 80s fashion designer and style expert, is worth mentioning here as she prioritized neon colors in her eclectic and whimsical collections.

“In fashion, neon colors, like neon lights, can energize the banalest setting while signifying the urban culture.”

As the name suggests, this 1980s stylistic phenomenon was characterized by wearing acrylic or wool leg warmers over leggings or tights.

In her 2001 book “Women I’ve Undressed: The Fabulous Life and Times of a Legendary Hollywood Designer” Orry-Kelly explains:

“Leg warmers were an important aspect of 1980s fashion, symbolizing the decade’s love of excess and theatricality.”

Worn mostly by women and girls to improve their style, leg warmers were paired with leotards, tights, tutus, shorts, and dresses.

Known for wearing leg warmers and a full athleisure style, way ahead of her times, Jane Fonda was one of the most famous proponents of this 80s style. 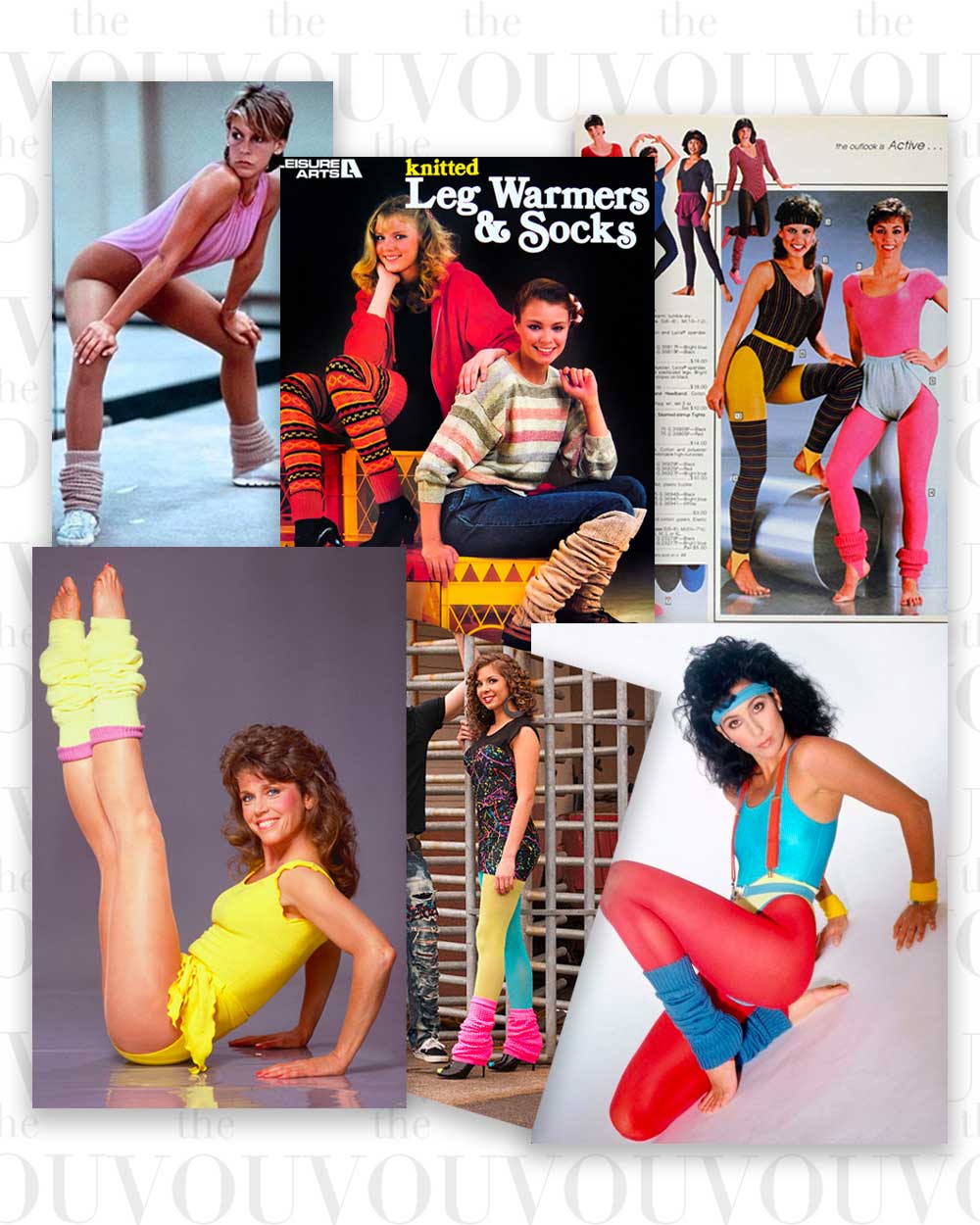 Bowie had a significant influence on the fashion of the 1980s and contributed to the trend’s popularity and place in the history of fashion.

It was interesting in the 1980s to see how a simple clothing element, the shoulder pad, used to add structure and shape to blouses and dresses, became a statement-making fashion trend.

“The shoulder pad, once the preserve of American football players, became the most powerful fashion statement of the Eighties” – Suzy Menkes, British Fashion Journalist. 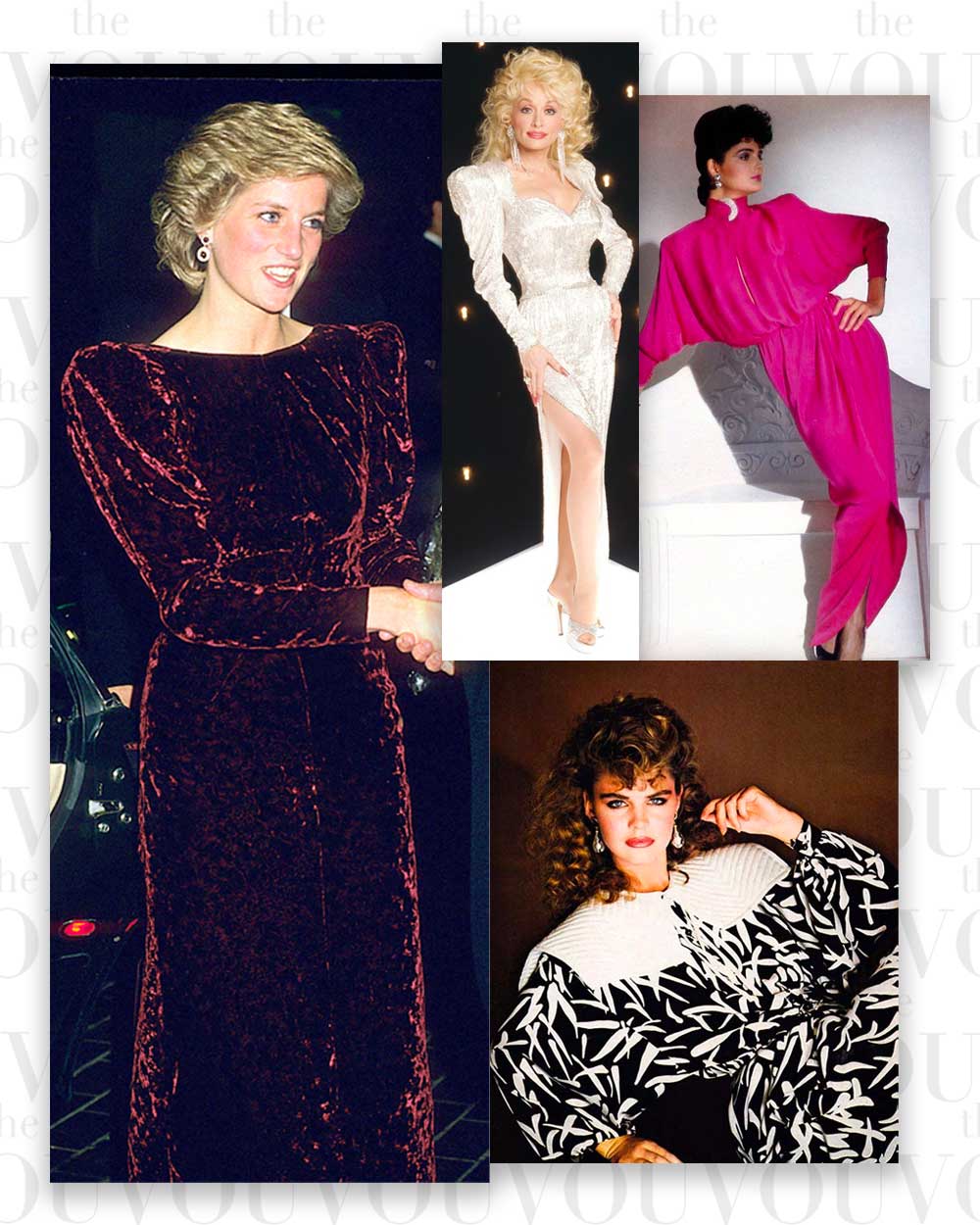 Oversized shoulder pads reflected the 1980s cultural and economic climate and were used in women’s clothing to create the idea of power dressing and, thus, women’s equal contribution to the workforce.

The American fashion designer Marc Jacobs is widely recognized for his influence on 80s fashion through his collections for women sporting oversized shoulder pads in bold, bright colors.

Characterized by rebellious and countercultural aesthetics, the punk rock fashion styles emerged at the end of the 70s and the start of the 80s decade.

“At the beginning, punk fashion consisted of secondhand clothes, which became the most visible hallmarks of the punk scene.”

In his “Punk Rock: So What? The Cultural Legacy of Punk,” researcher Joseph Johnson concludes that the 80s punk rock fashion trend was a counter-reaction to mainstream fashion’s growing consumerism and superficiality. 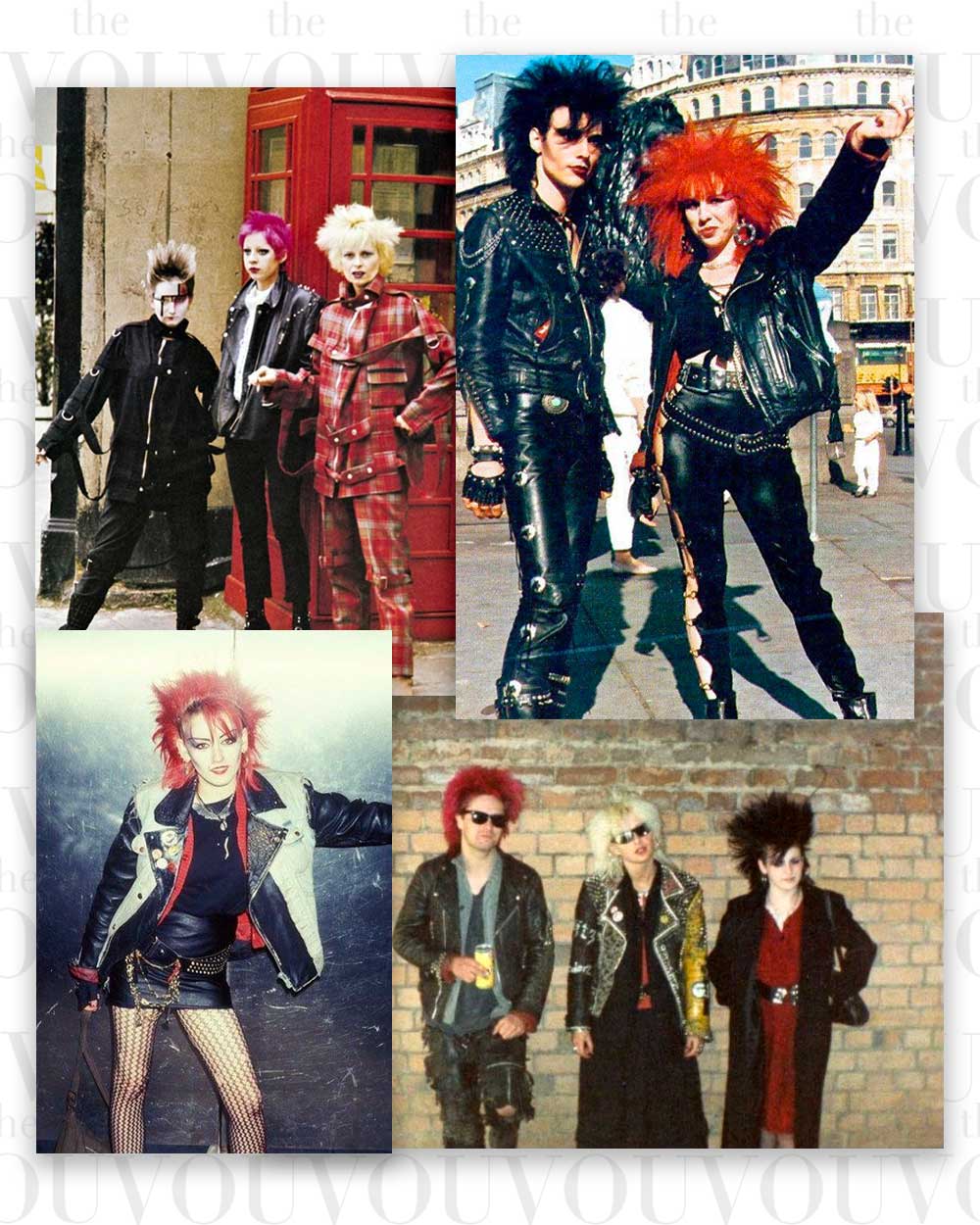 As such, punk rock fashion began incorporating political and social commentary elements, reaching a form of self-expression and rebellion against societal norms.

The British designer Vivienne Westwood is hailed as one of the most prominent 80s punk rock fashion contributors.

As the street culture grew in the 80s, a casual, comfortable, and often oversized clothing style emerged – the 80s Streetwear.

Influenced by the fashion of the hip-hop, skate, and surf culture, the streetwear style of the 80s featured graphic tees, oversized sweatshirts, and baggy jeans.

At the same time, the 80s saw a rise in sportswear brands like Adidas, Puma, Nike, and Reebok worn as streetwear; however,

“there was more to streetwear style than just the look,” 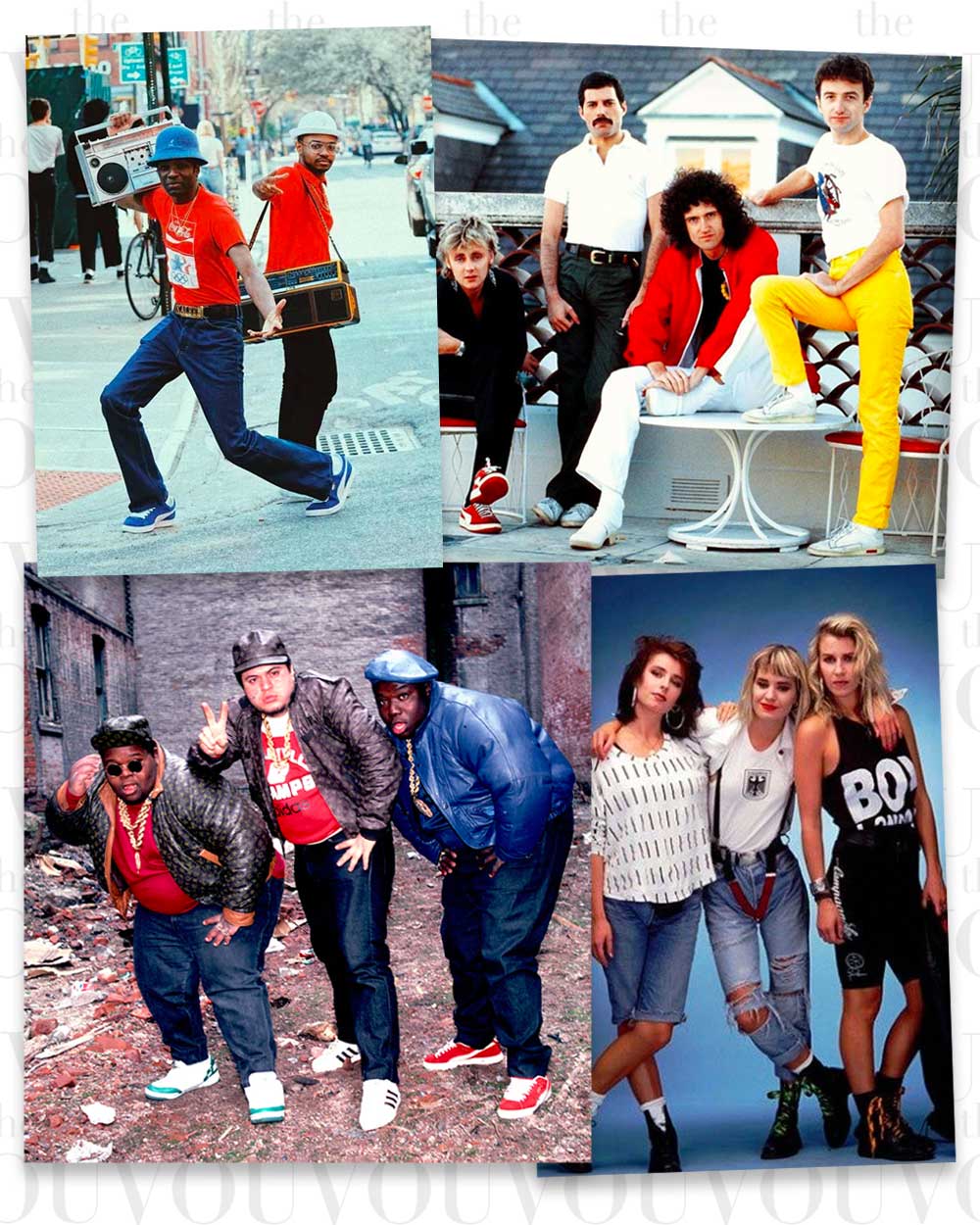 “Streetwear was not just about the clothes, it was a lifestyle.”

The 80s streetwear allowed young people to express individuality and a sense of belonging to a particular subculture.

Moreover, the streetwear style allowed the wearer to feel in charge of their own fashion choices, somehow going against the mainstream fashion industry.

The American fashion designer James Jebbia – founder of Supreme – is considered a key influencer of the 80s Streetwear by merging street culture with high-end fashion.

The 80s preppy look was influenced by the fashion of Ivy League colleges known for wearing classic staples such as button-down shirts, polos, khakis, and blazers.

Also known as “Preppy Chic,” the 80s look was characterized by a blend of clean, polished, and traditional aesthetics, with bold colors in a modern touch.

“Preppy fashion is all about taking a classic and making it modern.”

Similarly, in her research “The Preppy Handbook: An Introduction to the Ivy League Look,” Lisa Birnbach describes the 80s preppy style as a reflection of the times’ cultural and economic climate. 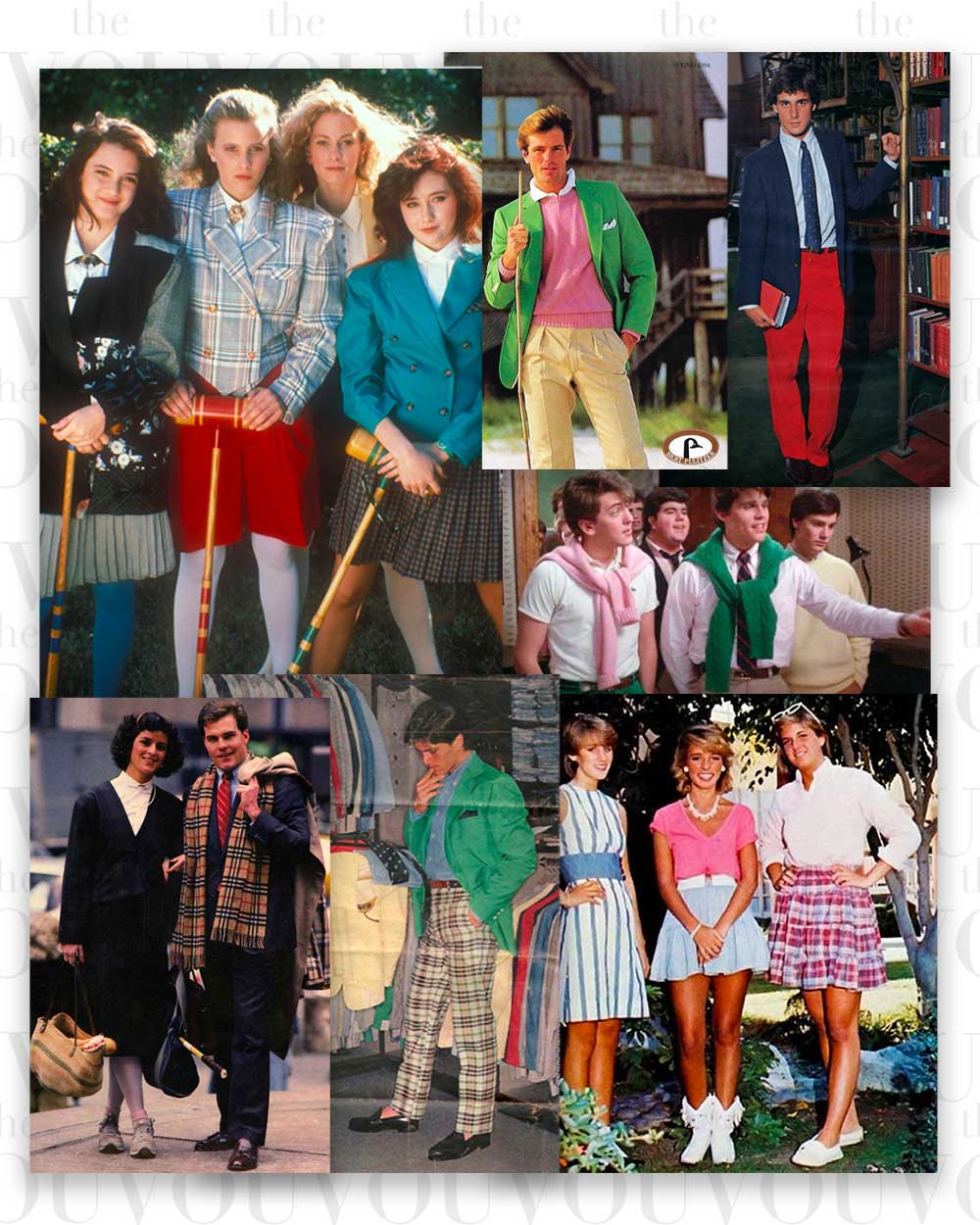 The 80s preppy style showcased a nostalgic desire for traditional and timeless looks and the values of Ivy League colleges.

The preppy style was also associated with the rise of the yuppie culture – upper-middle-class young urban professionals – looking to project a sophisticated and successful image.

Popular with women and men alike, the leather jacket trend emerged as influenced by the music and the films of the 70s and 80s decade.

“The Outsiders” (1983), starring Patrick Swayze and Tom Cruise wearing leather jackets, is considered one of the most iconic movies of the 80s and a classic representation of the youth culture and the social class divide of the time.

As such, the leather jacket of the 80s became a symbol of rebellion and youth, worn as an outer layer that created a casual, street-style look.

“One of the most versatile pieces of clothing a person can own that can be dressed up or down and look just as good on the back of a motorcycle as in a boardroom.” 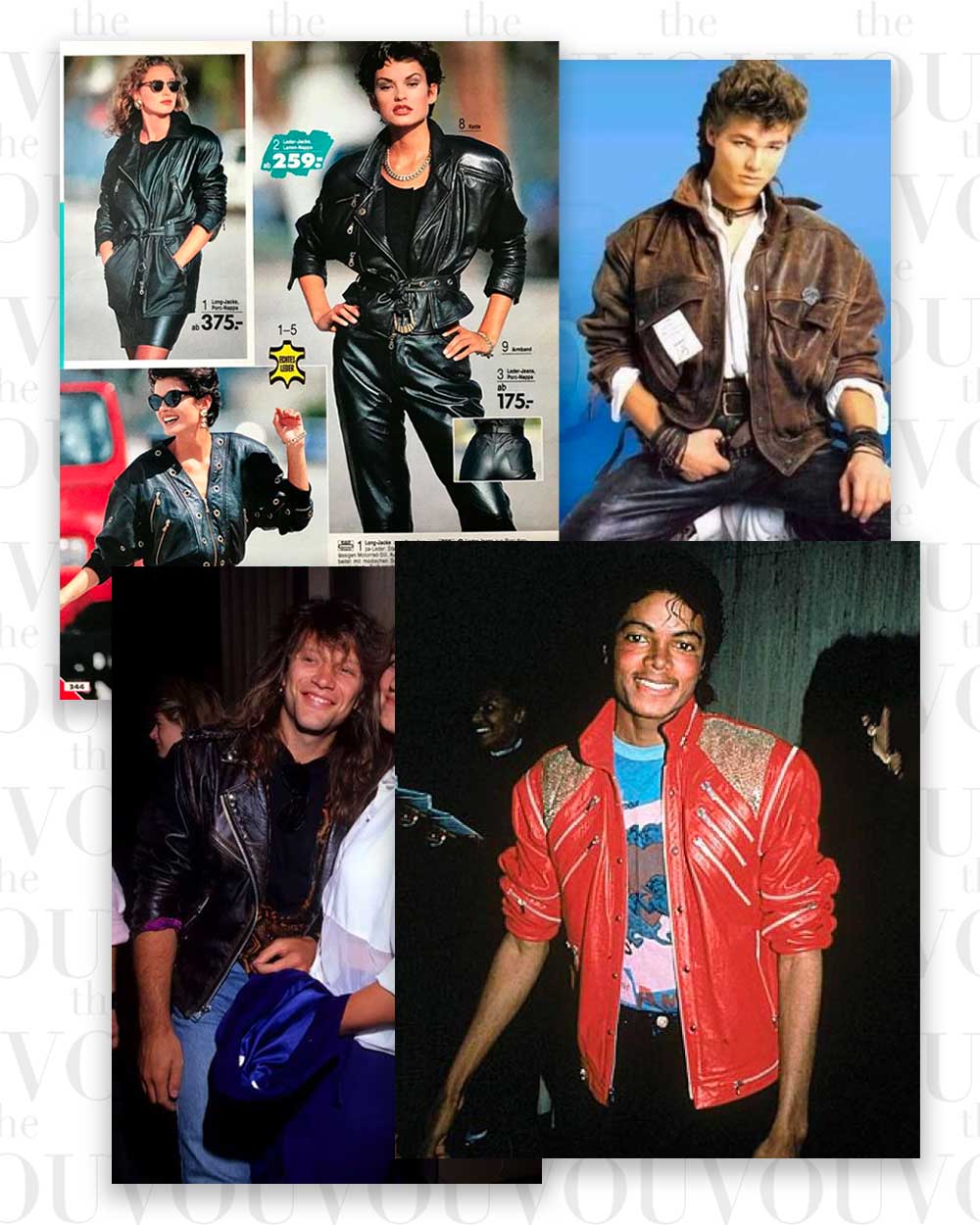 The trend was also associated with the rise of the subcultures, such as punk and rock, that became increasingly visible in the mainstream media during the 80s decade.

Renowned for avant-garde, dark, and gothic aesthetics, Rick Owens is hailed as a key 80s style expert in leather jackets, and his creations are considered iconic in the fashion world.

Characterized by exaggerated shapes and styles, voluminous hairstyles, big perms, and teased hair were super popular in the 1980s.

Popular with women, these unique hairstyles were achieved through perms, hair-teasing techniques, and hair-styling products such as mousse and hairspray.

Tim Blanks, Editor-at-large at Business of Fashion, recalls the 80s hairstyles with nostalgia:

“The 80s was the decade of big hair; the bigger, the better.”

The 80s trend of voluminous hairstyles highlighted a desire for attention-grabbing and glamorous looks influenced by the entertainment industry.

Vidal Sassoon was one of the most popular 80s stylists, known for innovative, revolutionary hairstyles in geometric cuts and layering to create volume.

From the rise of power dressing and the emergence of new fashion icons to the use of bold colors and the resurgence of retro styles, the 80s remains one of the most defining decades of the fashion industry.

Popularized by the emergence of fashion icons such as Annie Lennox and Grace Jones, power dressing, characterized by large shoulder pads, blazers, and suits, was a dominant trend in the 80s.

Then, the use of bold colors and patterns in neon and geometric prints by the decade’s music icons such as Madonna and Cyndi Lauper was another defining feature of 80s fashion.

The influence of punk, pop culture and new-wave music gave rise to unconventional and edgy styles, such as ripped and distressed denim and leather jackets with safety pins and studs.

As a result of the influence of hip-hop and breakdancing culture, the 80s saw the appearance of leg warmers and the rise of Streetwear.

Overall, influenced by music and pop culture and coupled with the emergence of celebrity fashion icons, the 1980s were a decade of experimentation and boldness in fashion.

Which one of these 80s fashion trends do you see as most popular, and why?

Which popular fashion trends from the 80s do you think we’ve missed and should include in our next article update?

Please leave your comments below; we always appreciate and use them to learn, improve, and update these articles.

Exploring Cottagecore Aesthetic in 2023: Is It Still a Thing?