Shaped by larger-than-life personalities and trendsetters who influenced 80s fashion, the decade is recognized as one of the most iconic decades in fashion, beauty, and style.

This article will look at the top 10 most influential people of the 80s and how they shaped the decade’s fashion and style.

From pop culture icons like Annie Lennox, Joan Collins, and Whitney Houston to legendary designers like Ralph Lauren and Jean-Paul Gaultier, these individuals left an indelible mark on fashion history and continue to inspire fashion lovers.

So, whether you’re a fashion historian or just a fan of 80s nostalgia, it’s time to explore the style revolution of the 80s and the icons who influenced 80s fashion the most. 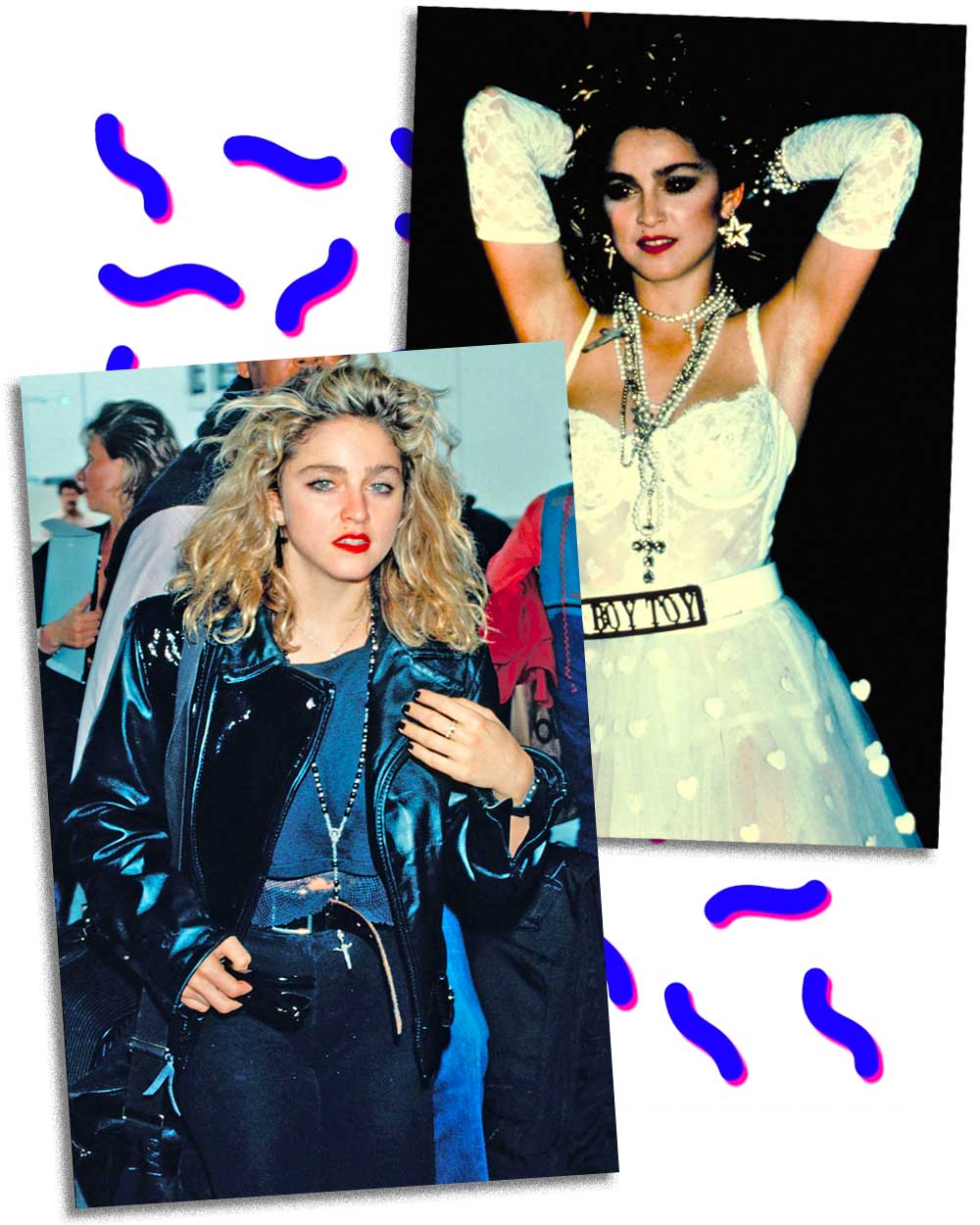 With eclectic and controversial stylistic choices (for those times), Madonna, known as the “Queen of Pop,” significantly influenced the 80s fashion decade.

“Madonna was the queen of the eighties and the one who defined the era’s fashion, the one who set the trends.”

Throughout the decade, Madonna continued to evolve her image and style to stay at the forefront of music and media.

Nowadays, thanks to her music and unique fashion choices such as lace, fishnet stockings, and religious imagery, Madonna is remembered as the most prominent fashion icon of the 80s.

“Madonna’s influence on fashion in the 1980s was undeniable. She was the ultimate style icon of the era, paving the way for a new type of beauty standard.” 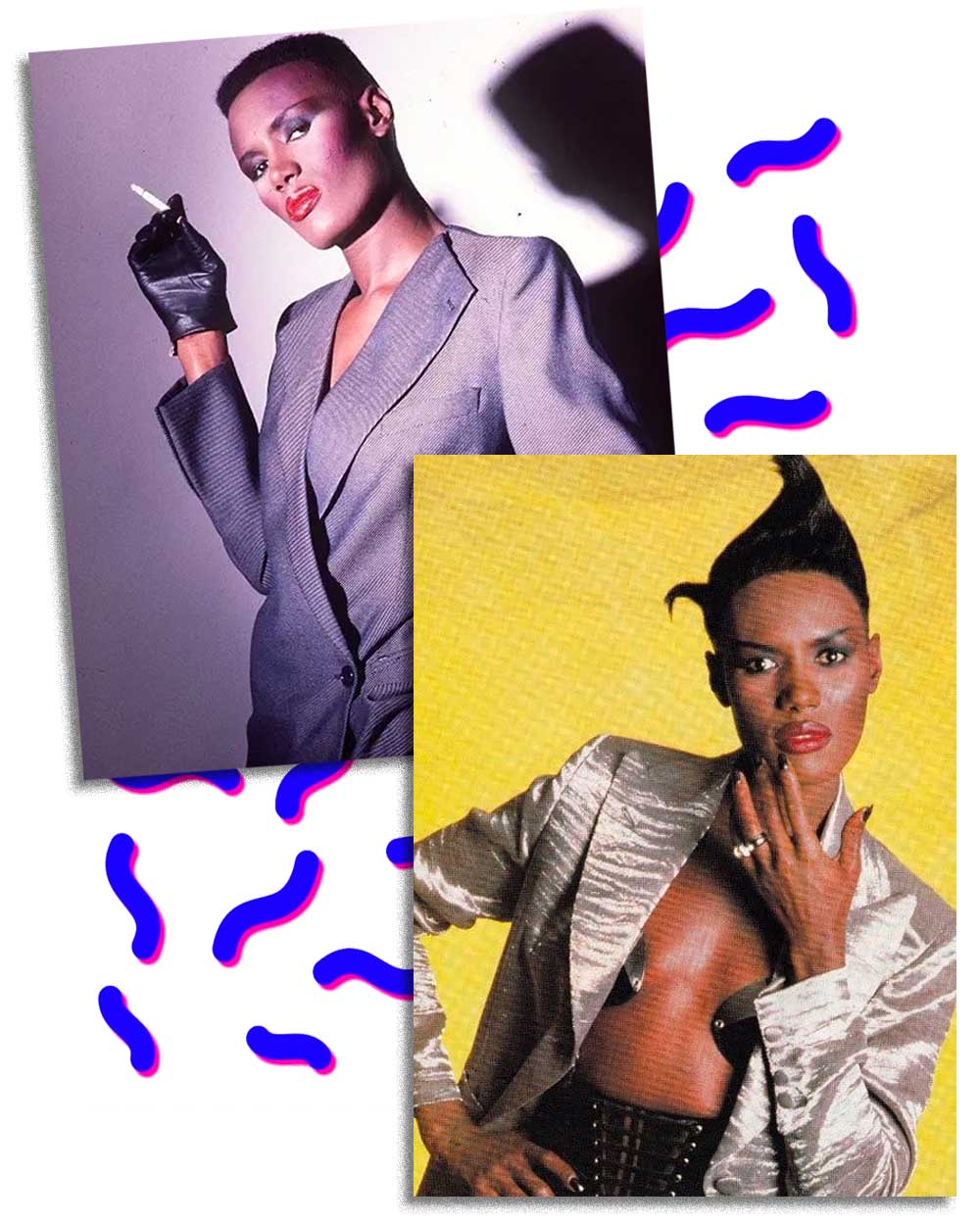 With an androgynous look and bold fashion choices, Grace Jones redefined the beauty and fashion standards of the 80s decade.

Incorporating stylistic elements of masculinity and femininity, Jones had a unique style that challenged the time’s societal norms and pushed the boundaries of fashion.

“Grace Jones was one of the most influential fashion icons of the 1980s. Her androgynous look and bold fashion choices helped to pave the way for a new type of beauty standard” 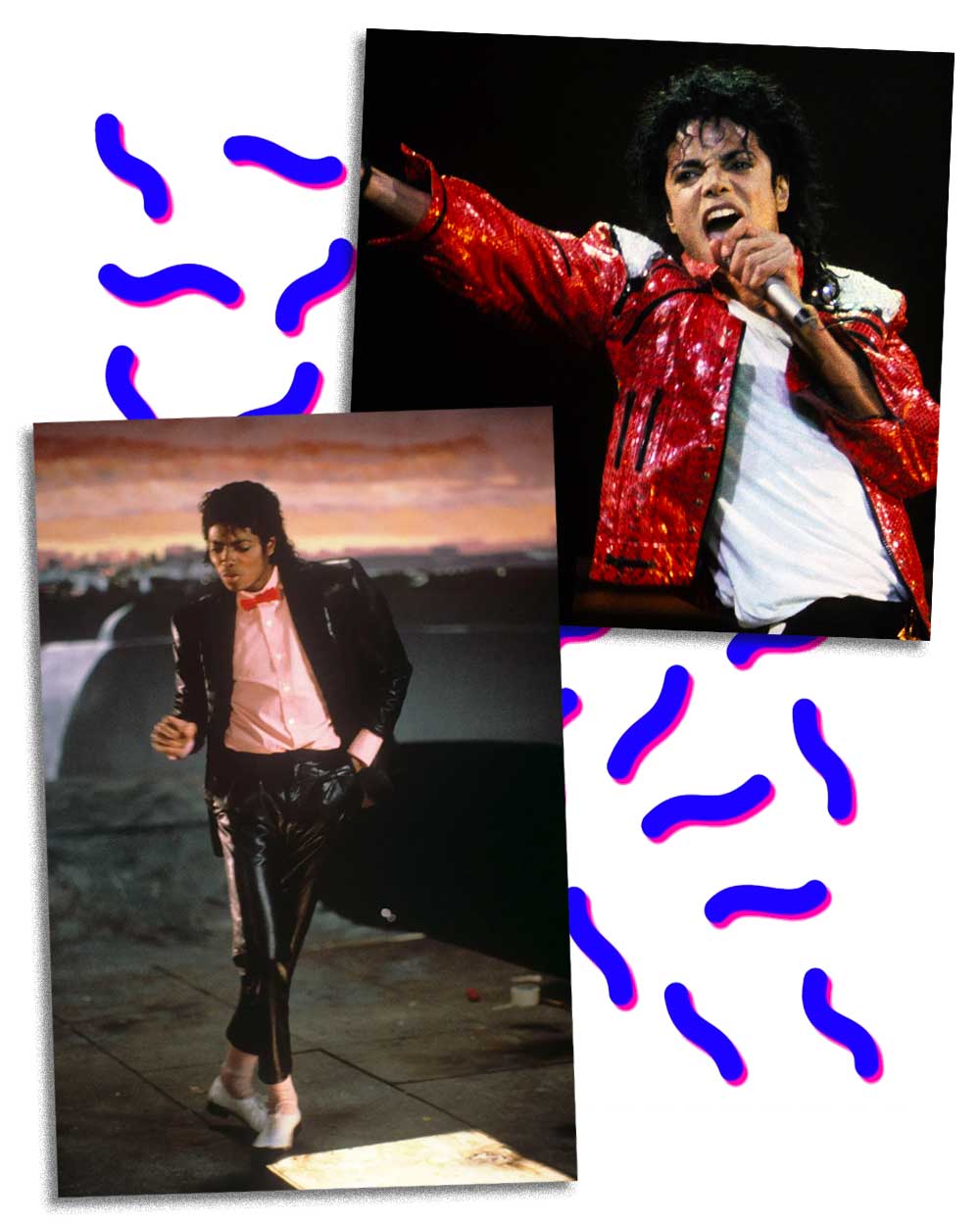 The American musician also incorporated elements of military and futuristic styles in his flamboyant and theatrical costumes on and off stage.

“Michael Jackson’s influence on fashion in the 1980s was undeniable. His iconic ‘Thriller’ jacket and other flamboyant costumes helped to popularize a new type of fashion” 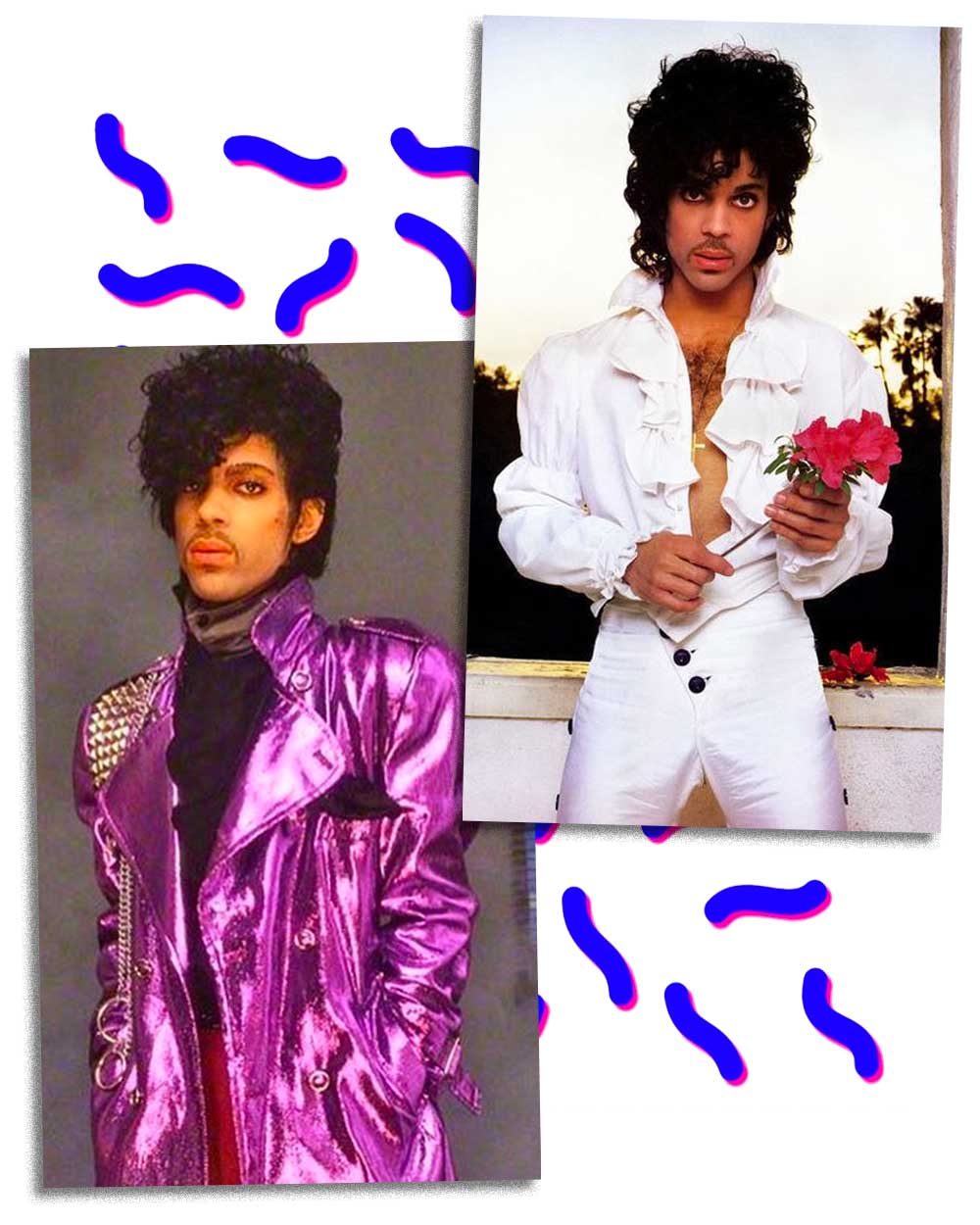 Prince is hailed as one of the most flamboyant and theatrical musicians of the 80s decade who influenced 80s fashion.

Unique and eclectic, Prince’s fashion style was influenced by funk and R&B music.

The American singer is considered one of the most stylish men of his time, and his influence on fashion and music is still felt today.

“Prince’s influence on fashion in the 1980s was undeniable. His flamboyant and theatrical style helped to popularize the use of purple in men’s fashion” 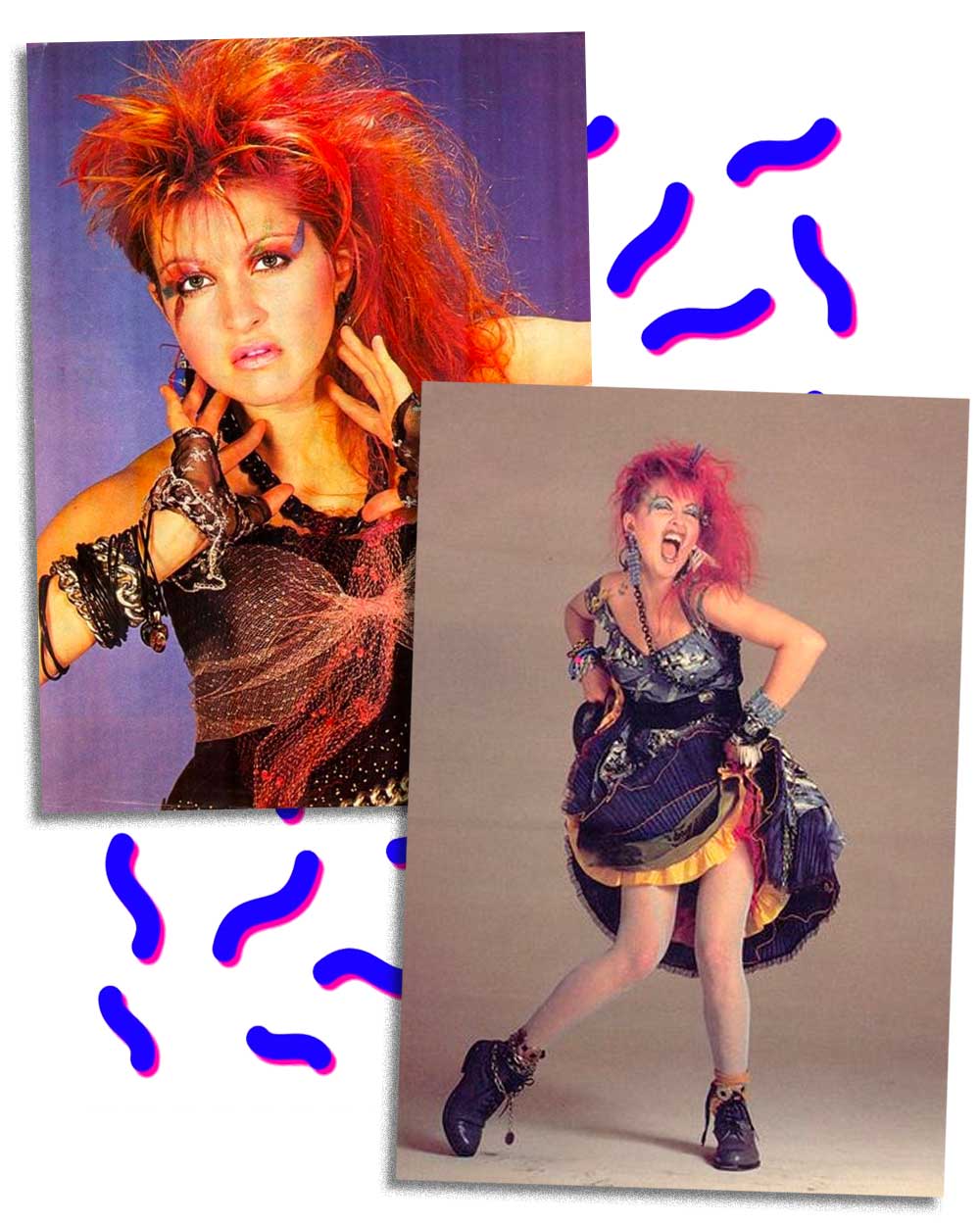 Cyndi Lauper was among the first celebrities to mix patterns, colors, and textures into her outfits.

Fond of oof-beat accessories like mismatched earrings, necklaces, and bracelets, Lauper’s fashion style was considered a representation of the 80s pop and rock culture and an inspiration to girls and women of the time.

“Cyndi Lauper was one of the most influential fashion icons of the 1980s. Her colorful and eclectic style helped to popularize the use of bold patterns and bright colors in women’s fashion”

wrote Rebecca C. Tuite, in “Fashion: The Definitive History of Costume and Style” (2012). 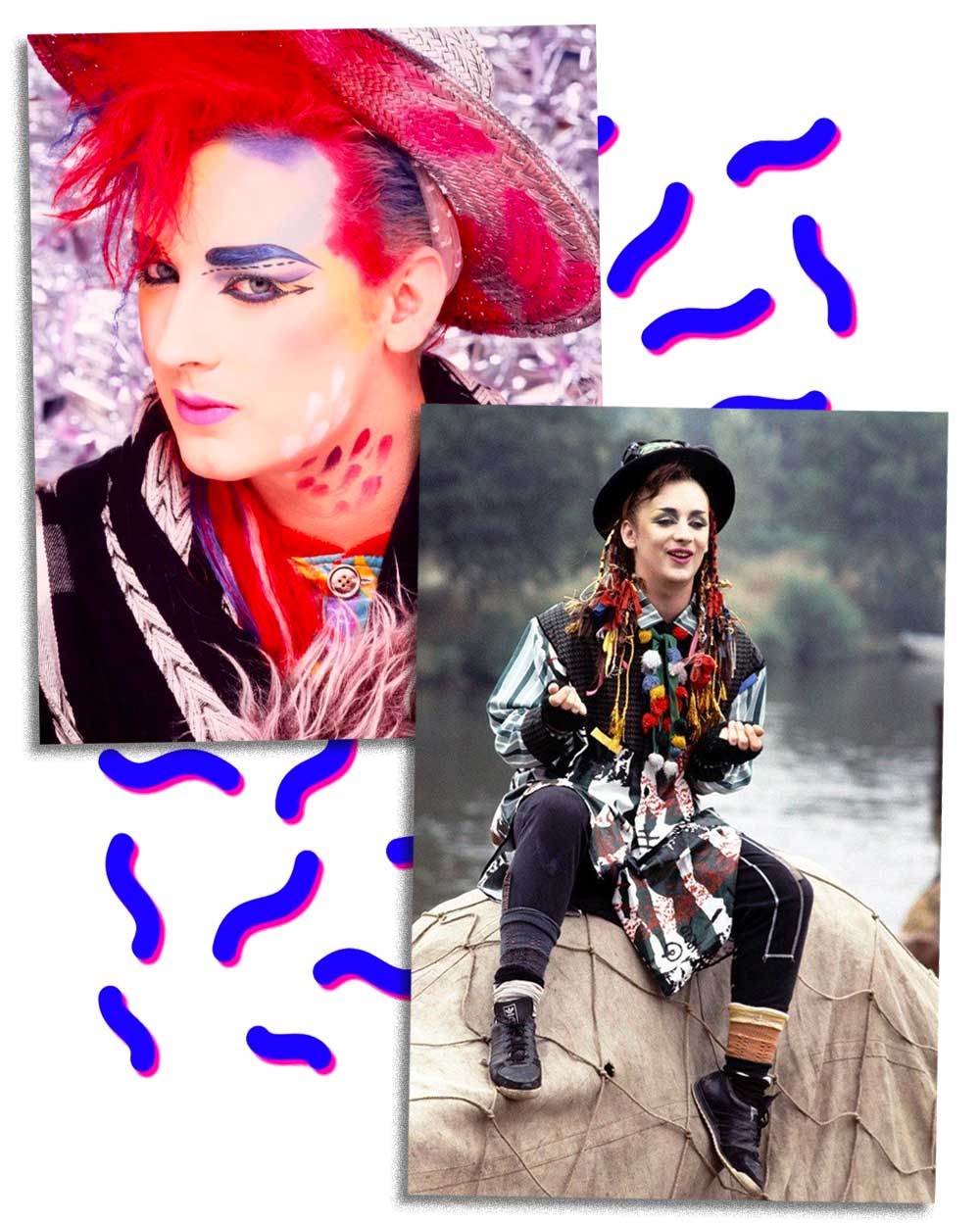 Currently, an influential figure in the LGBTQ community, in the 80s, Boy George popularized the use of androgynous and gender-bending styles in men’s fashion.

The looks of the New Romantic movement and other ethnic cultures like Rastafarianism, Indian, and Egyptian influenced Boy George’s androgynous fashion sense.

George’s vivid and brightly colored patterned clothes in exotic prints and bold stripes were accessorized with hats, large earrings, and bracelets and completed with heavy eyeliner and bright lipstick.

“Boy George’s influence on fashion in the 1980s was undeniable, and his androgynous and gender-bending style helped to popularize a new type of fashion for men” 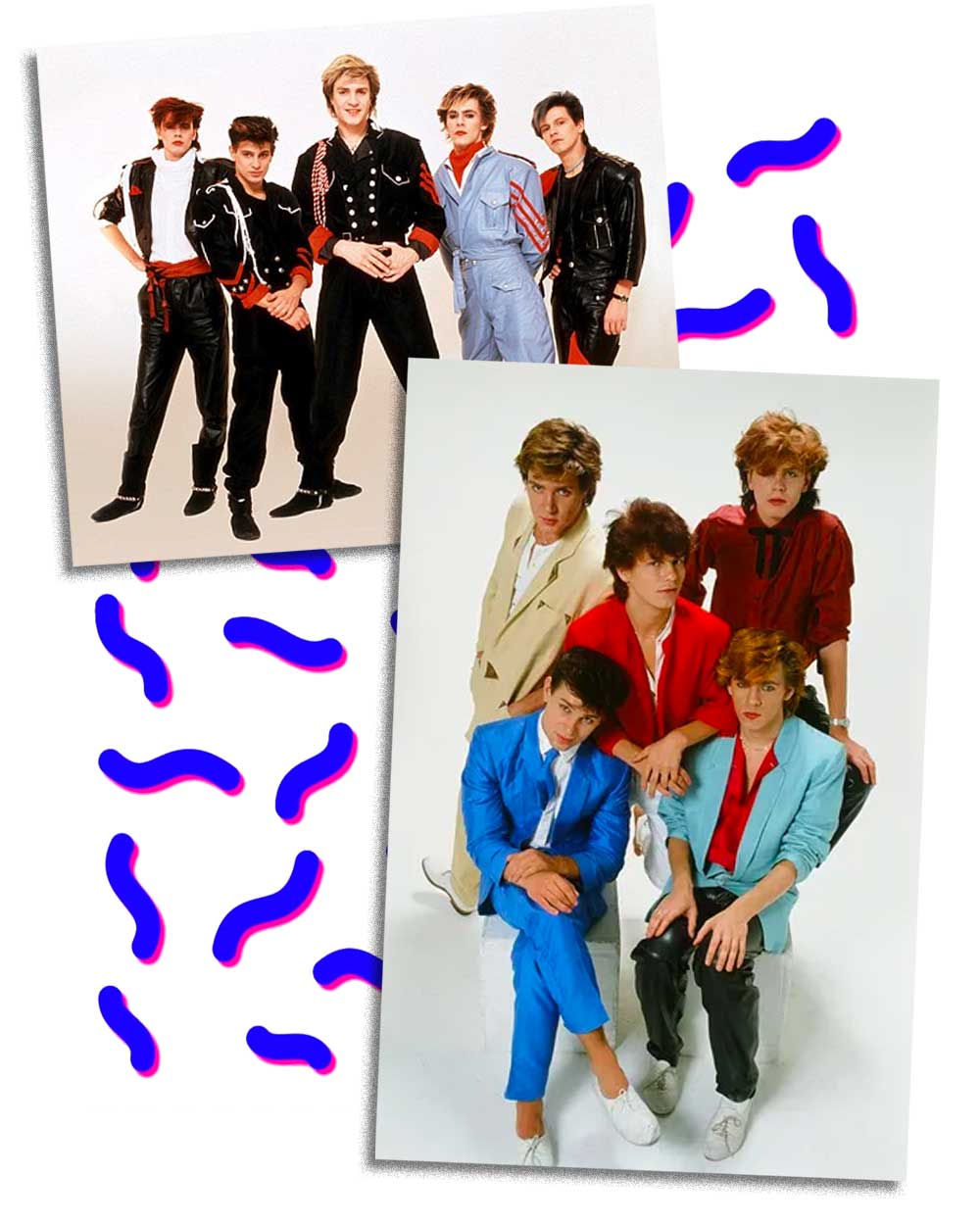 Duran Duran is a British rock band formed in Birmingham in 1978 and hailed as one of the decade’s biggest bands who influenced 80s fashion.

As a pioneer of the new romantic movement, Duran Duran had a sleek and stylish image that mixed elements of new-wave and post-punk fashion with bright colors like pink or purple.

“Duran Duran was one of the most stylish bands of the 80s, known for their sharp suits and cutting-edge fashion sense.”

wrote Amber Butchart in the 2020 book “The Fashion of Film: How Cinema Has Inspired Fashion.” 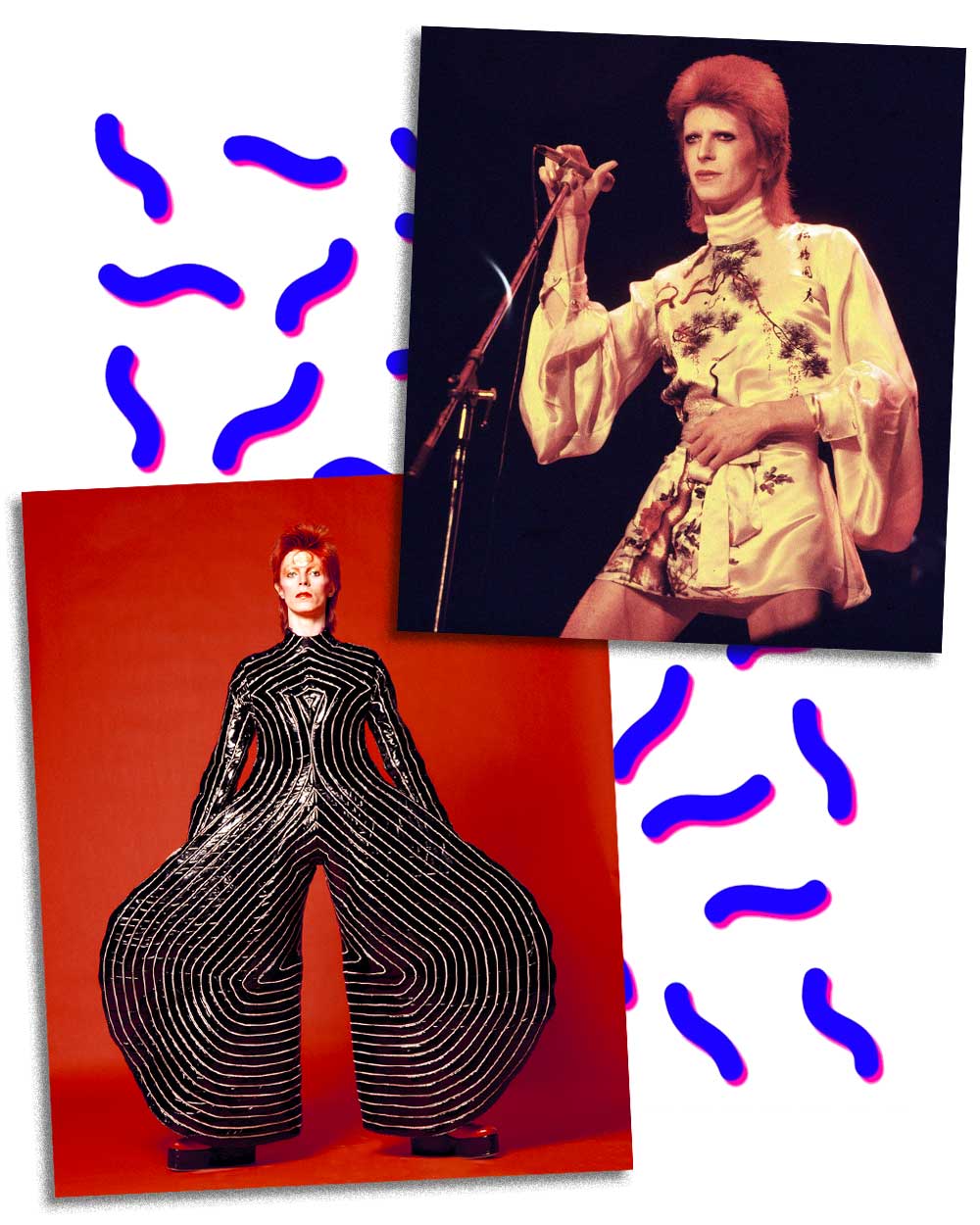 David Bowie was a British singer, songwriter, actor, and record producer who passed away on January 10, 2016.

Widely regarded as an innovator in the music industry for his distinctive voice and musical style, Bowie’s fashion style during the 1980s was characterized by a mix of androgynous, futuristic, and theatrical looks.

“David Bowie was the ultimate style chameleon; he always seemed to be one step ahead of fashion trends, constantly reinventing himself and his look, from his early days as Ziggy Stardust to his 80s “Thin White Duke” persona.” – British Vogue, 2016 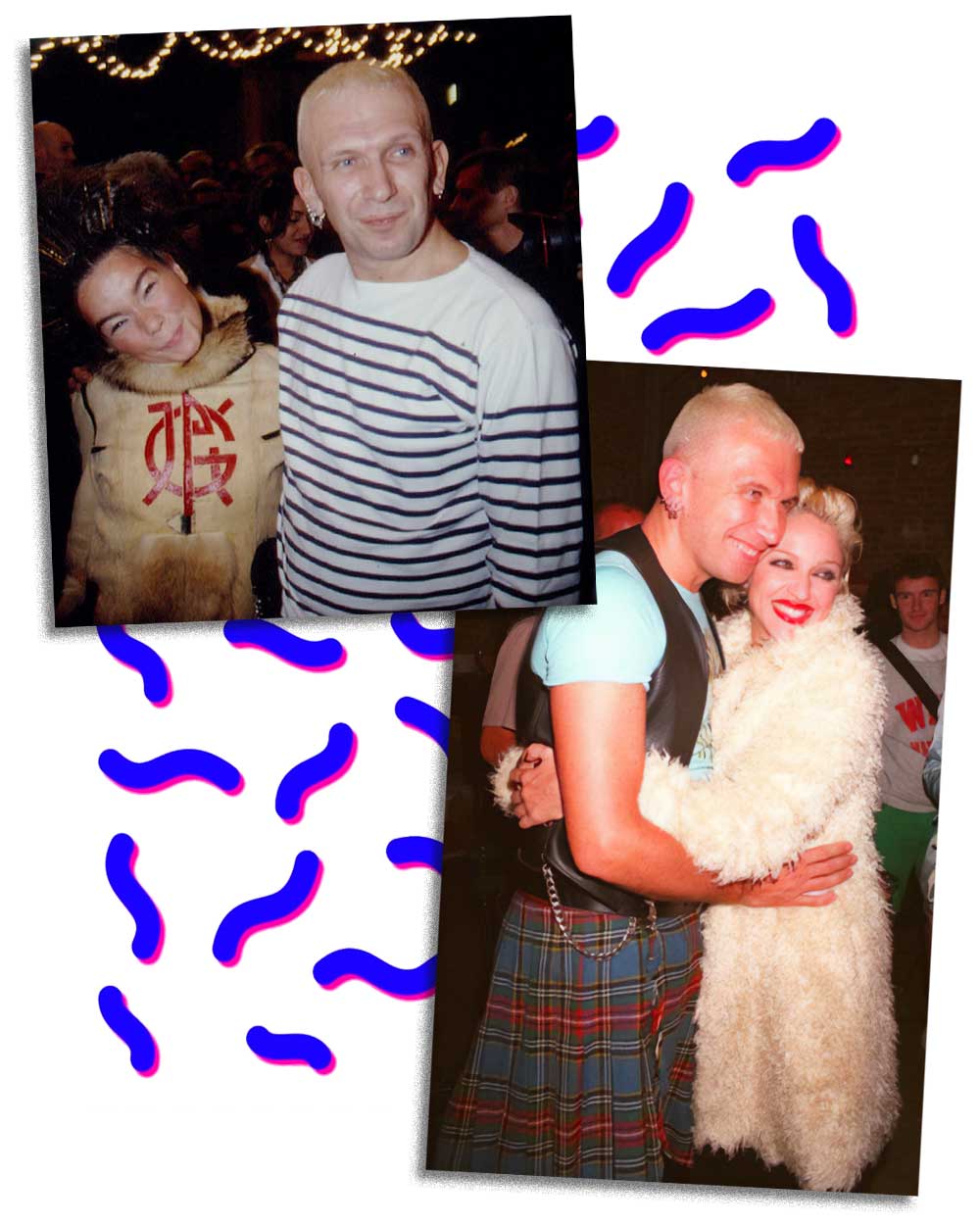 After launching his fashion label in 1976, Gaultier became one of the world’s most influential and celebrated fashion designers.

One of the most iconic looks popularized by Gaultier in the 80s was the “tattoo shirt,” a t-shirt with a sailor-inspired tattoo graphic printed on the front and back.

Gaultier is also known for pushing the boundaries of gender and fashion norms, such as using corsets as outerwear.

But one of the most celebrated and recognized Gaultier creations was the “cone bra,” a fashion accessory worn by Madonna during her 1990 Blond Ambition Tour. 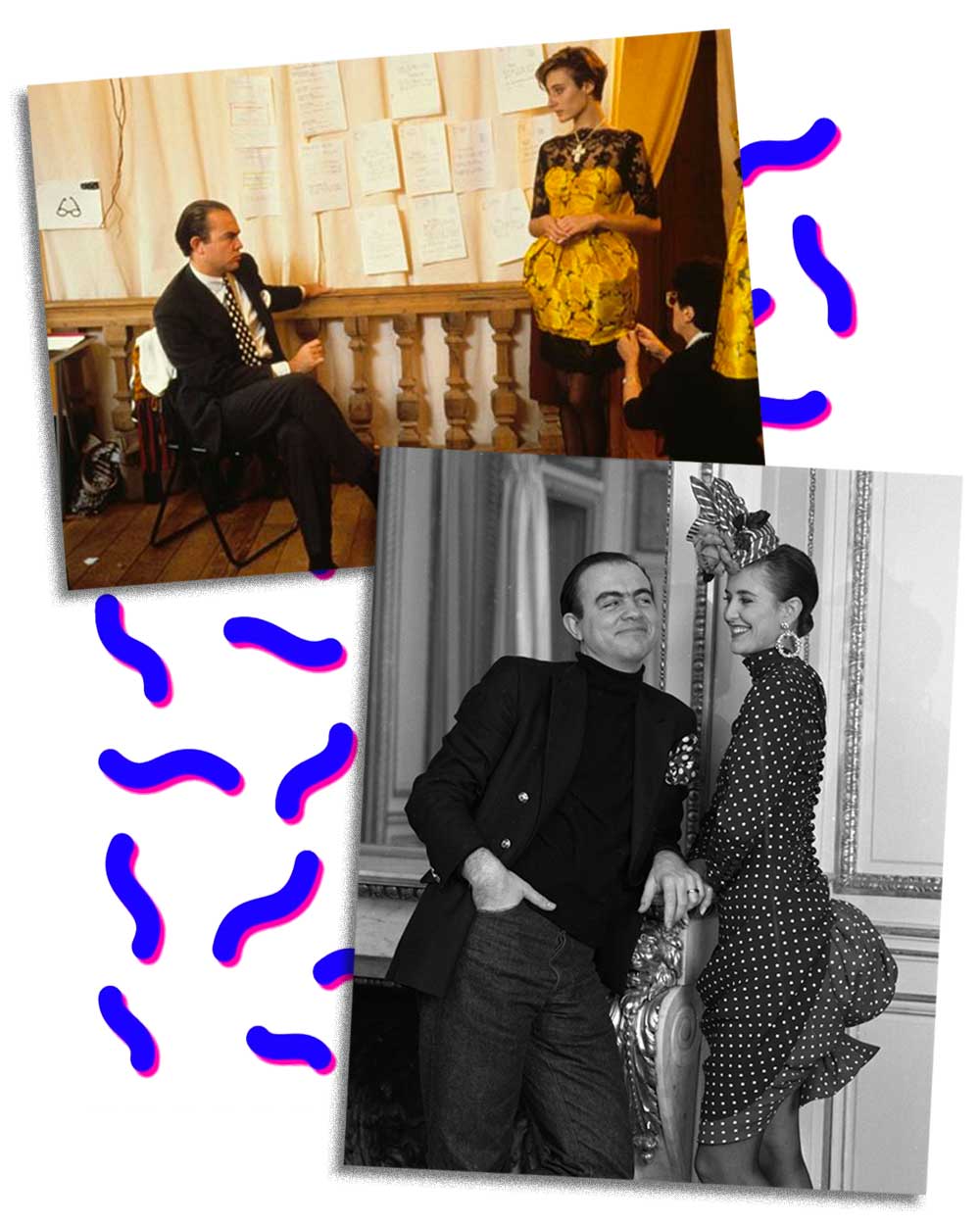 Another key influencer of the 80s fashion was the French designer Christian Lacroix.

Lacroix launched his fashion house in 1987 and quickly gained fame for his opulent designs inspired by crucial historical moments.

Also considered one of the leaders of the “Haute Couture” movement of the 80s, Lacroix’s creations were popular with celebrities, socialites, and fashion enthusiasts.

In conclusion, the 80s fashion scene was defined by bold and iconic personalities who left an indelible mark on the industry.

From legendary designers like Lacroix and Jean-Paul Gaultier to pop culture icons like Madonna and Michael Jackson, these individuals shaped the decade with their unique style and influence.

The impact of the 80s can still be seen today in the fashion world, and it will always be remembered as a time of creativity, experimentation, and boundary-pushing.

Which one of these characters do you see as the most influential in the 80s fashion scene?

Which influential people do you think we’ve missed and should include in our next article update?

Exploring Cottagecore Aesthetic in 2023: Is It Still a Thing?

These Are the 10 Most Popular Styles of the 80s Fashion