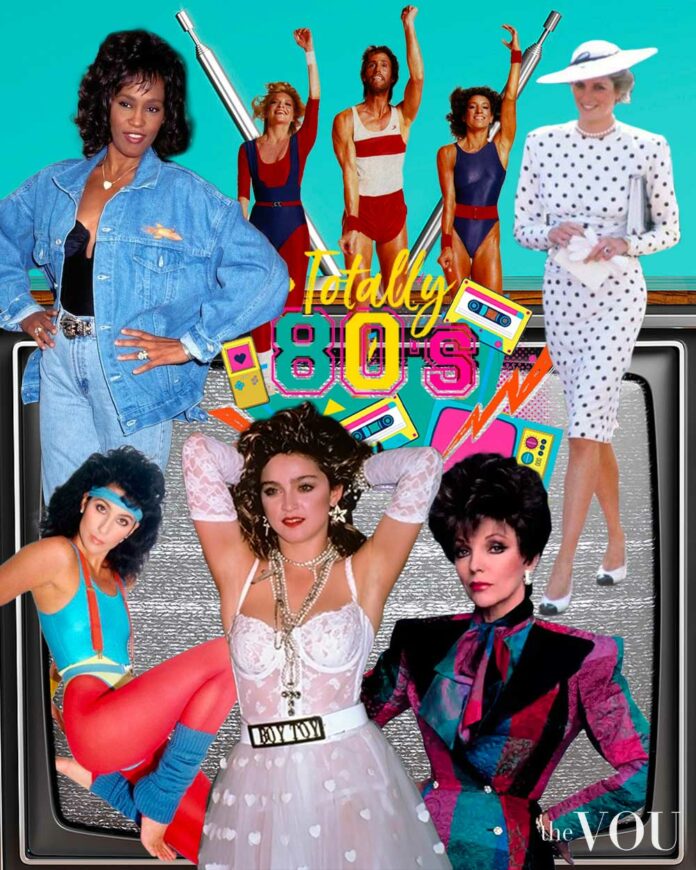 A Look at the Most Iconic Fashion Trends of the Eighties

80s fashion holds such a unique place in the world of fashion, trends, and styles.

In a world of no internet and social media, fashion in the 1980s drew inspiration from music and TV shows, creating more style idols than in any previous fashion decade.

In this article, I’ll take you back down memory lane to experience the most beautiful moments of the 80s fashion and styles.

Without further ado, these are the 21 most representative and inspiring 80s fashion pics, images, and moments ever.

Power suits or “power dressing” was all the rage in the 80s.

Grace Jones’ sharply-tailored suits with broad padded shoulders inspired the ‘girl power’ and cross-dressing movement of the 1980s – an inspiration for artists such as Annie Lennox, Lady Gaga, Rihanna, Solange, and Lorde.

Also, as a sign women were rising through the ranks, Britain was run by Margaret Thatcher, the country’s first-ever female Prime Minister.

The shoulder pads were such an influential trend in the 80s fashion that dress designers even adopted them.

The 80s fashion styles were influenced by those times stars and celebrities, promoting fitness and aerobic exercises on TV.

Aerobic outfits, gym leggings, oversized sweaters, and even skinny jeans for women were all garments that required legwarmers as a finishing touch.

4/21
Leather Jackets with Rolled Up Sleeves

Worn by music and movie stars such as Bon Jovi, Madonna, Cher, Tom Cruise (Top Gun), and Morten Harket, leather jackets were a must-have in the 80s.

However, the 80s most popular leather jacket styles had large, padded shoulders and were worn with the sleeves rolled up, and Michael Jackson’s Thriller look is the perfect example.

Other popular 80s leather jacket styles were the double rider and cafe-racer jackets, with an option to customize them to your liking.

The 80s was also the decade of designers focusing on comfortable and stylish preppy styles.

Seen as a critical 80s trend, preppy shirts (also seen in ‘Light Academia‘) were worn as either a formal button-down or a smart casual t-shirt.

The trend of slogans printed on t-shirts was quickly adopted by Pepsi, Nike, Adidas, and Guess after realizing the advertising power of their own printed logos on T’s.

The 80s is also the decade of mini skirts, skater skirts, and Rah-rah’s.

But the mini-skirt trends peaked in the 80s, worn with legwarmers and/or leggings.

Popular materials were denim and spandex (see Kylie Minogue’s high-shine minidresses) or augmented with layers of net and lace, Madonna-style.

Popular in 1940s fashion (and later in the 50s fashion), polka dot dresses, skirts, and tops resurfaced in the 80s with a vengeance.

The style was brought back by the French fashion house Emanuel Ungaro on its SS 1985 ready-to-wear collection, fast adopted by royalty, pop stars, and cinema celebrities alike.

Even in the 80s wearing natural animal skin was drawn upon.

However, that didn’t deter celebrities from wearing over-the-top animal prints on every imaginable outfit and style.

From leggings to handbags, skirts, and sunglasses, bold prints of leopard, zebra, tiger, giraffe, and python were the rage.

Most fashionable sunglasses in the 1980s had giant frames and sported colored or mirror lenses.

Some of the most popular 80s sunglasses frames were oversized Wayfarers and Aviators by Rayban.

Yet, depending on your social circle, you could spot Gucci, Cartier, and Vuarnet in large frames.

Thierry Mugler’s spring 1983 ready-to-wear show is the best example of clothes in which one side is not the same as the other.

The asymmetric style was best exemplified by Molly Ringwald, a famous Hollywood actor of the 80s.

Some key characteristics of asymmetrical style and design feature a one-shoulder bodice, slanted hemlines, or necklines, often seen nowadays in the streetwear pieces of Japanese fashion.

After the influence of drugs and freedom of “flower power” of the 70s fashion wore off, the 80s started as a self-conscious decade.

With the help of music divas like Cher, promoting and selling sportswear apparel in bold colors became an 80s thing.

What we nowadays call athleisure once started as leotards and bodysuits, a functional form of fashion.

Levi’s 501 jeans campaign involved top celebs of those times, such as Nick Kamen, who had a top 5 hit single in 1986, written and produced by Madonna and Stephen Bray.

The trend of pairing double denim jackets with high-waisted jeans continue until the end of the 80s, thanks to Sam Cooke, Marvin Gaye, Ben E. King, and Percy Sledge boosting Levi’s sales and vinyl records.

In a trend started by fitness celebrities that moved from gyms to 80s catwalks, thick socks, layered socks, and even socks with lace edging were an 80’s fashion statement for the girls.

Neon socks worn over another pair and matched with trainers were popular in various contexts, at the gym, meeting with friends, and even at the office.

And as the idea of wearing socks everywhere became popular, ankle socks worn with heels started to emerge, from movie clips on MTV to movies and the catwalks.

Initially, sheer tights had neutral colors – like brown during the day and black in the evening for a more natural look.

Influenced by the growing fitness craze, sheer colored tights became a thing in the mid-eighties, with many top fashion brands creating colored stockings.

The colored sheer tights trend continued into the 90s fashion, worn at the office and even at dinner events.

Stirrups are light metallic frames hanging on each side of a saddle, used to support mounting or riding.

Stirrup pants borrow the concept by having a strap of material at the end of the foot to hold the pants in place.

Given their construct, stirrup pants were trendy in the 80s in sporting activities such as aerobics, ballet, and dancing, eventually permeating into daily fashion looks.

Towards the end of the eighties, women of all ages could be seen wearing leggings and stirrup pants matched with large t-shirts or comfortable oversized sweaters.

After Madonna launched her global hit “Like a Virgin” on MTV in 1984, lace dresses and gloves became an instant fashion statement throughout the 80s.

The trend can be seen everywhere, even in movies, and one of the most popular characters spring the style was Alexis Carrington in Dynasty, played by Joan Collins.

Originally known as a harem skirt, these pants were introduced to western fashion circles in 1910 by the Parisian designer Paul Poiret.

Long, baggy, with a very low drop-crotch and fitted at the ankle, harem pants were also known as the MC Hammer pants.

In psychedelic colors and dizzying patterns, harem pants are another look that makes 80s fashion unforgettable and unique.

Some of the most popular swimsuits of the 80s had a high-cut one-piece, like the babes on the original Baywatch series used to wear.

The high cut was designed to elongate the legs while the waist tucked everything into a slimmer silhouette, whether there’s a bit of weight on the hips or tummy.

Inspired by London’s skinhead culture that took the 60s fashion by storm, the 80s punk-style version had a milder, more enigmatic look.

The softer variations of post-punk 80s fashion were influenced by a blend of skinhead culture with other cultures and musical trends, from goth rock to glam and psychedelic rock.

Distressed, acid-wash jeans were popular in the mid to late 80s and early 90s.

Invented by the Rifle Jeans company in Italy, washing denim with chlorine and using a pumice stone to distress the material.

The acid-washed denim was so popular that even non-rock acts such as Bros and Salt N’ Pepa jumped on it, triggering brands like Jordache, Guess, Wrangler, Levi’s, and Gitano to create limited collections and collab pieces.

What Kinds of Clothes Were Popular in the 80s?

For men, some of the most popular clothes in the 80s were leather jackets, polo shirts, Oxford shirts, and turtlenecks.

What Should I Wear to an 80s Party?

The best 80s theme party outfit depends on the style you want to recreate.

In the eighties, there were several fashion styles, but some of the most popular were power office, street casual, punk, and athletic, each with its own shoes and accessories.

Some of the most popular 80s accessories are:

How Do You Dress in 80s Fashion?

Dressing a perfect 80s fashion look is simple, as long as you combine some of the most representative clothes of that decade with the relevant accessories to the 80s style you choose to showcase.

For example, if you want to recreate a stylish 80s post-punk look, all you need is a biker-style leather jacket, acid-washed jeans, a loud logo t-shirt with an 80s famous slogan, and a pair of black leather boots.

Then, finish this classic 80s look with relevant punk accessories, such as metallic bracelets, studs, spikes, laces, and chains.

The eighties were a decade of fashion trends for people ‘loved to hate,’ as you saw in our gallery of iconic ’80s outfits.

Hair was teased and permed to the limits, voluminously styled, and sometimes crimped; make-up was bold with clashing colors, almost like face paint.

Nevertheless, the 80s influence has shaped not only the culture and fashion looks of that decade but also the styles we wear today.

Many of the 80s fashion styles are back in 2023, such as power dressing, denim overalls, and leather jackets.

The music television channels (MTV launched in 1981) and the first generation of personal computers (1st Apple Computer launched in 1984) significantly influenced the looks of 80s fashion.

And let’s not forget the influence that Jane Fonda and Olivia Newton-John’s fitness clips had on teen girls, even wearing sheer tights and legwarmers everywhere, with anything.

Are you interested in this eighties fashion article as a source of style inspiration, or are you looking for 1980s designers and brands?

Which one of these 80s fashion trends is your favorite and why?

Are there any other 80s fashion trends, styles, looks, or brands, missing from this list that you’d like to add? Let us know.

With a Bachelor of Science (B.S.) focused in Journalism with a Concentration in Marketing from the University of Florida, Ana Escalante is an award-winning journalist with powerful reporting in fashion, beauty, pop-culture, and the current editor-in-chief Rowdy Magazine. Ana's articles covering fashion, media, and digital culture, focusing on emerging communities, have been published on Glamour Magazine, The VOU, Harper's Bazaar, PAPER Magazine, StyleCaster, Teen Vogue, ELLE UK, CR Fashion Book, and more.