The anime aesthetic had a powerful impact on the 90s fashion, styles, and trends.

The 90s anime aesthetics refers to the visual style and design elements found in anime productions from the 1990s decade that continues to influence the fashion industry in current times.

The aesthetics of the 90s anime continue to influence current fashion trends and the overall streetwear movement.

This article will explore the impact of 90s anime aesthetics in modern fashion, from stylistic trends to the latest designs.

We’ll look at the top 5 most representative animes of the 90s decade and their impact on global fashion trends.

Finally, I’ll share the best 90s anime aesthetics elements and ideas you can use to create a unique clothing style.

One of the foremost authorities in the 90s anime aesthetic is Sugimoto Yoshio.

In his book, “The Cambridge Companion to Modern Japanese Culture,” Yoshio explores the Western cultural influence on Japanese fashion and how Western style has been influenced by Japanese culture, particularly anime and manga. 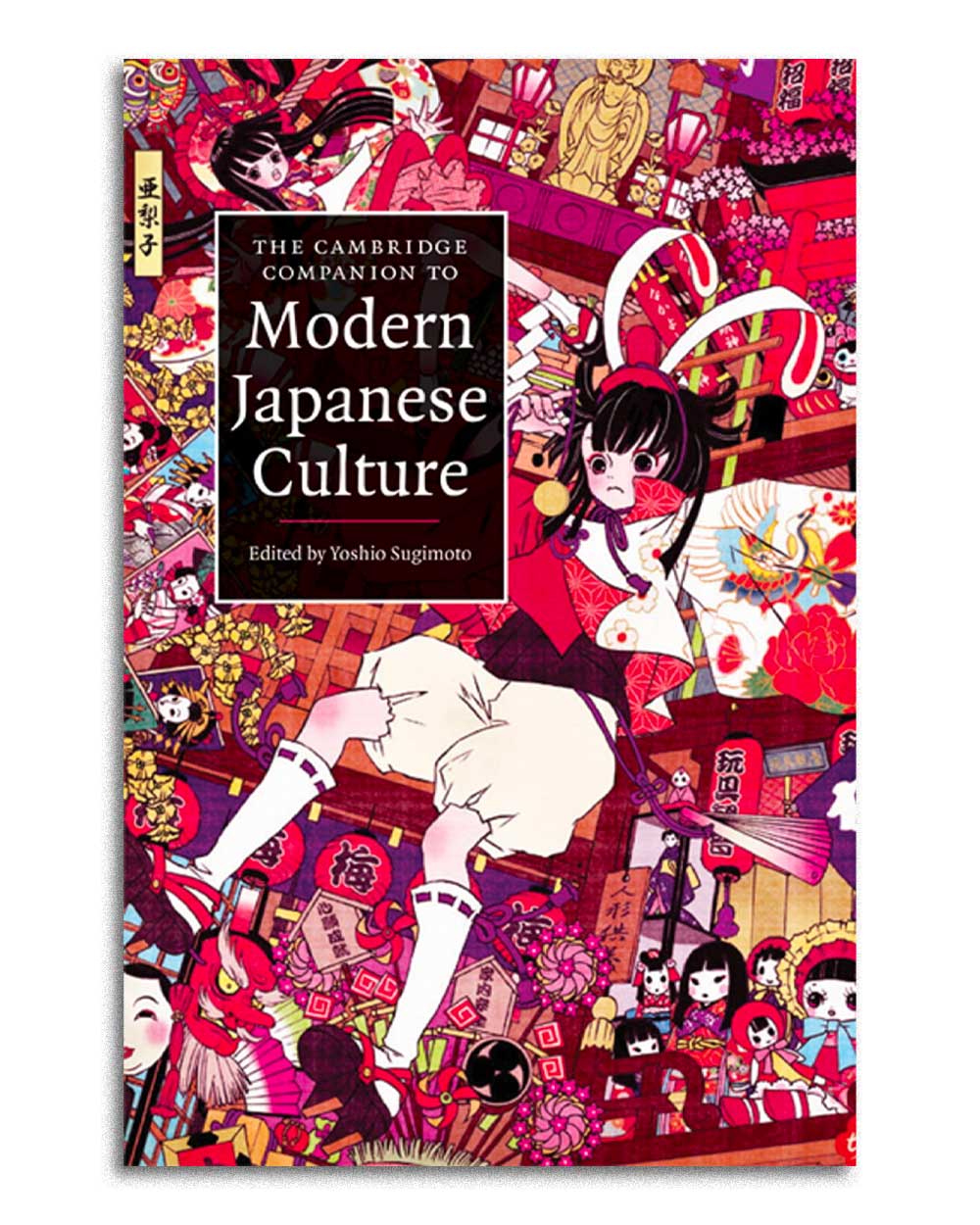 “Oversized apparel in bright colors, frequently showcased in the 90s decade anime, spilled over into fashion, turned by designers into oversized and colorful clothing with a futuristic or cyberpunk feel.”

To better understand how this movement impacted fashion, I’ve compiled a list of the top 5 most famous anime aesthetics from the 90s worth watching.

Without further ado, these are the top 5 examples of 1990s anime aesthetics still influencing the world of fashion in 2023. 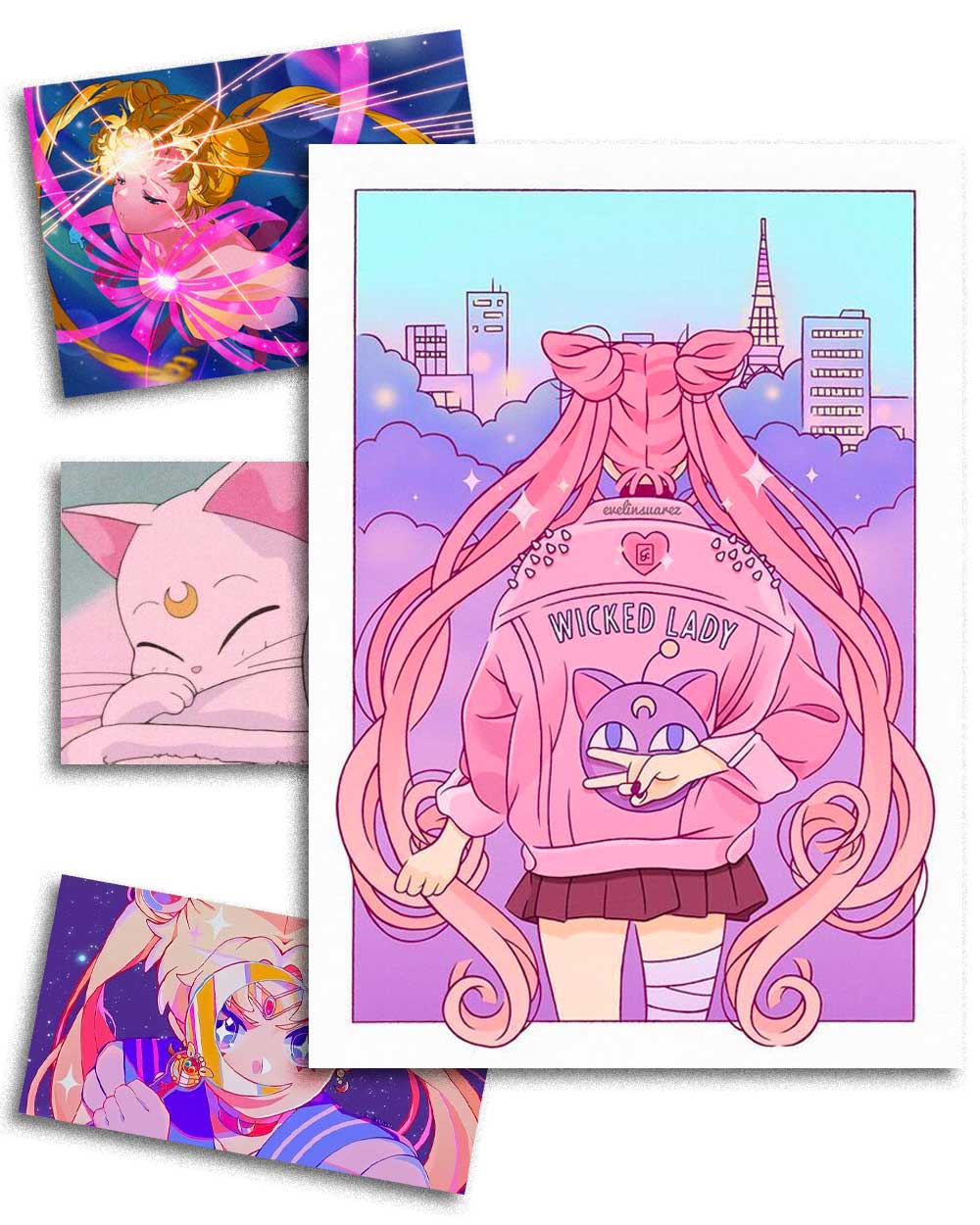 Sailor Moon was the first anime series to transcend into the West with mainstream success.

The anime became a pop culture icon of the 90s anime history and remained one of the most significant symbols of the classic 90s anime aesthetic. 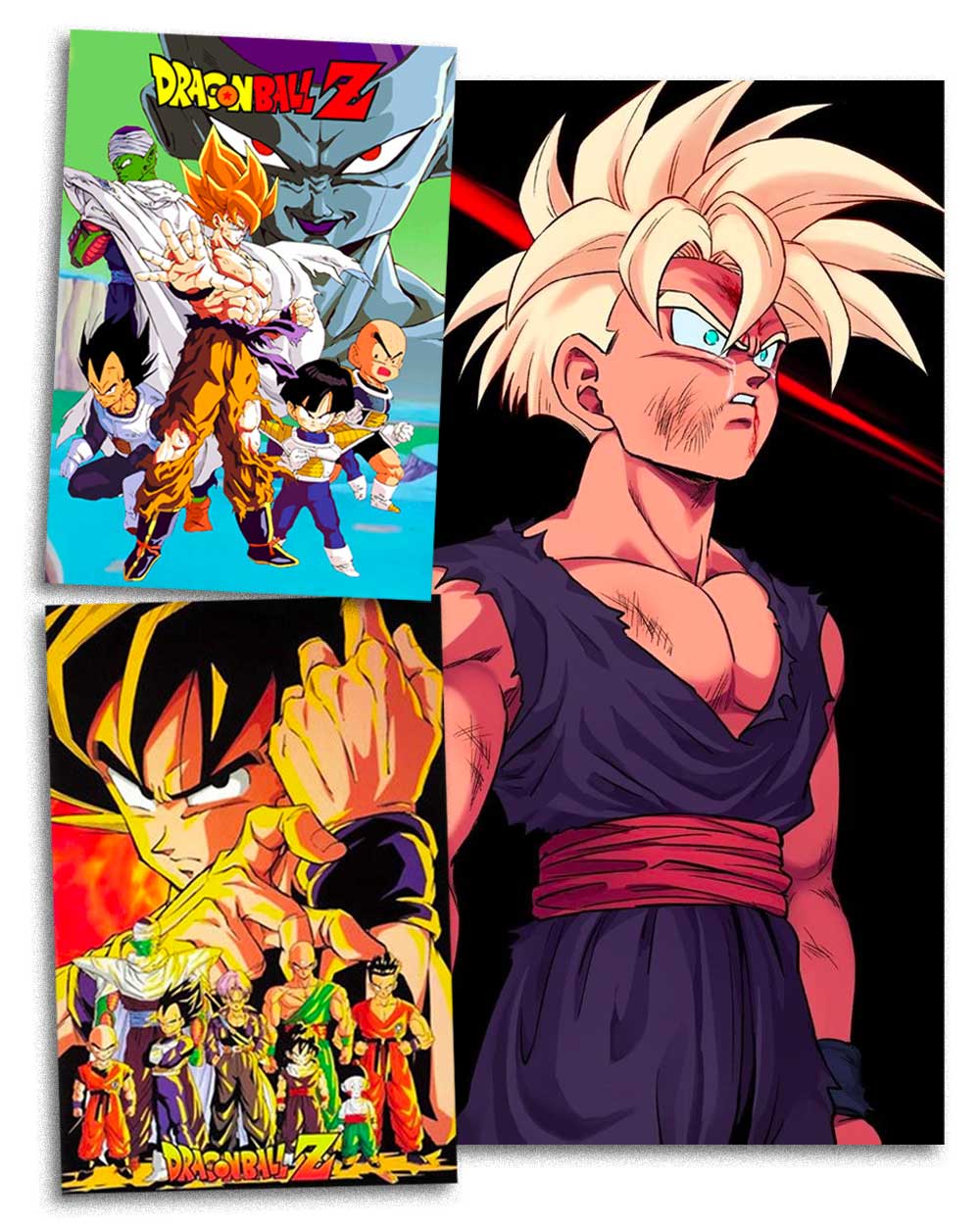 Dragon Ball Z’s original series further popularized anime in the Western world and is seen as a key cultural touchstone for anime fans. 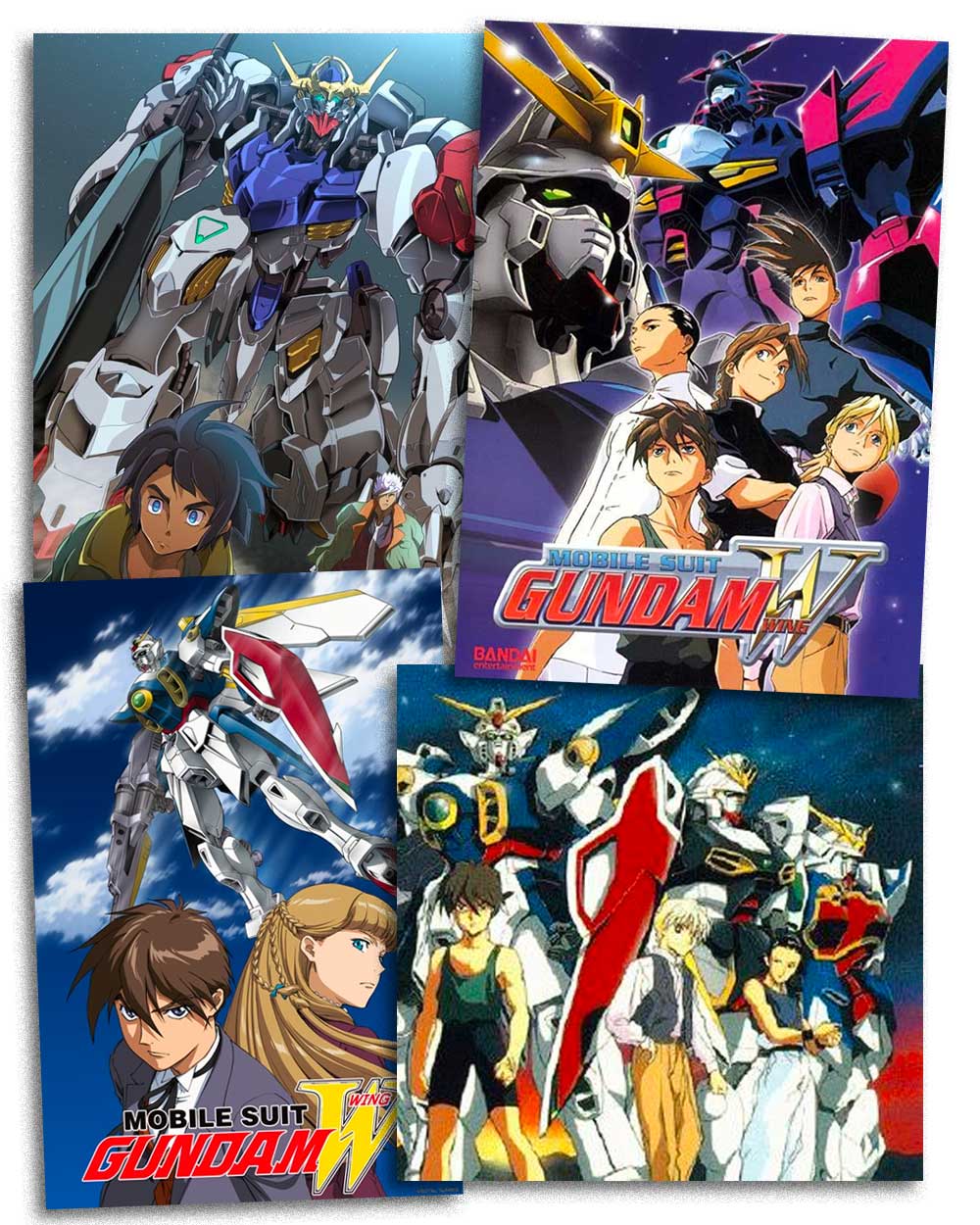 Another popular and influential anime series that influenced the 90s fashion aesthetic was Gundam Wing. 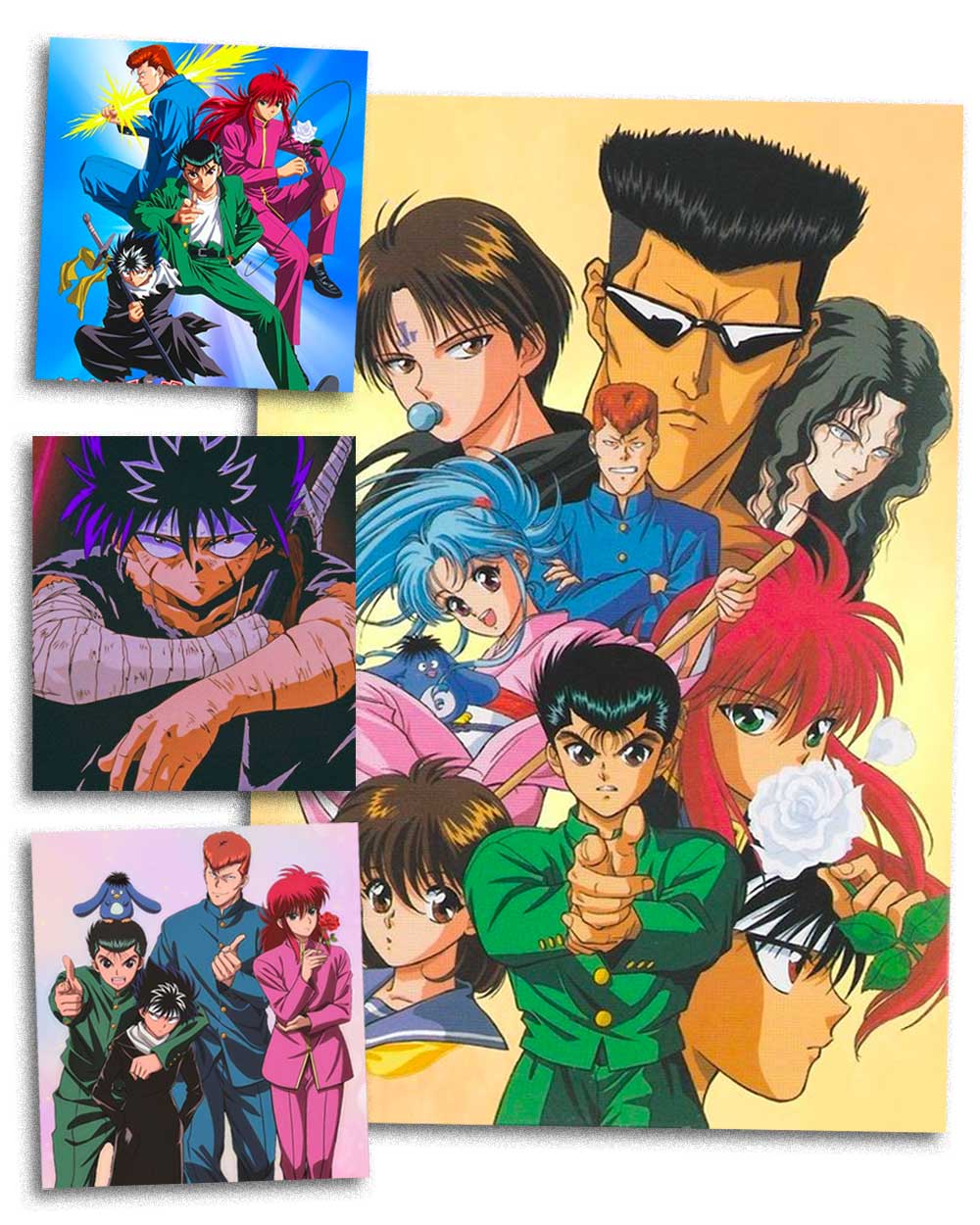 The Yu Yu Hakusho series delivered a unique combination of action with supernatural elements that augmented the character’s outfits and styles. 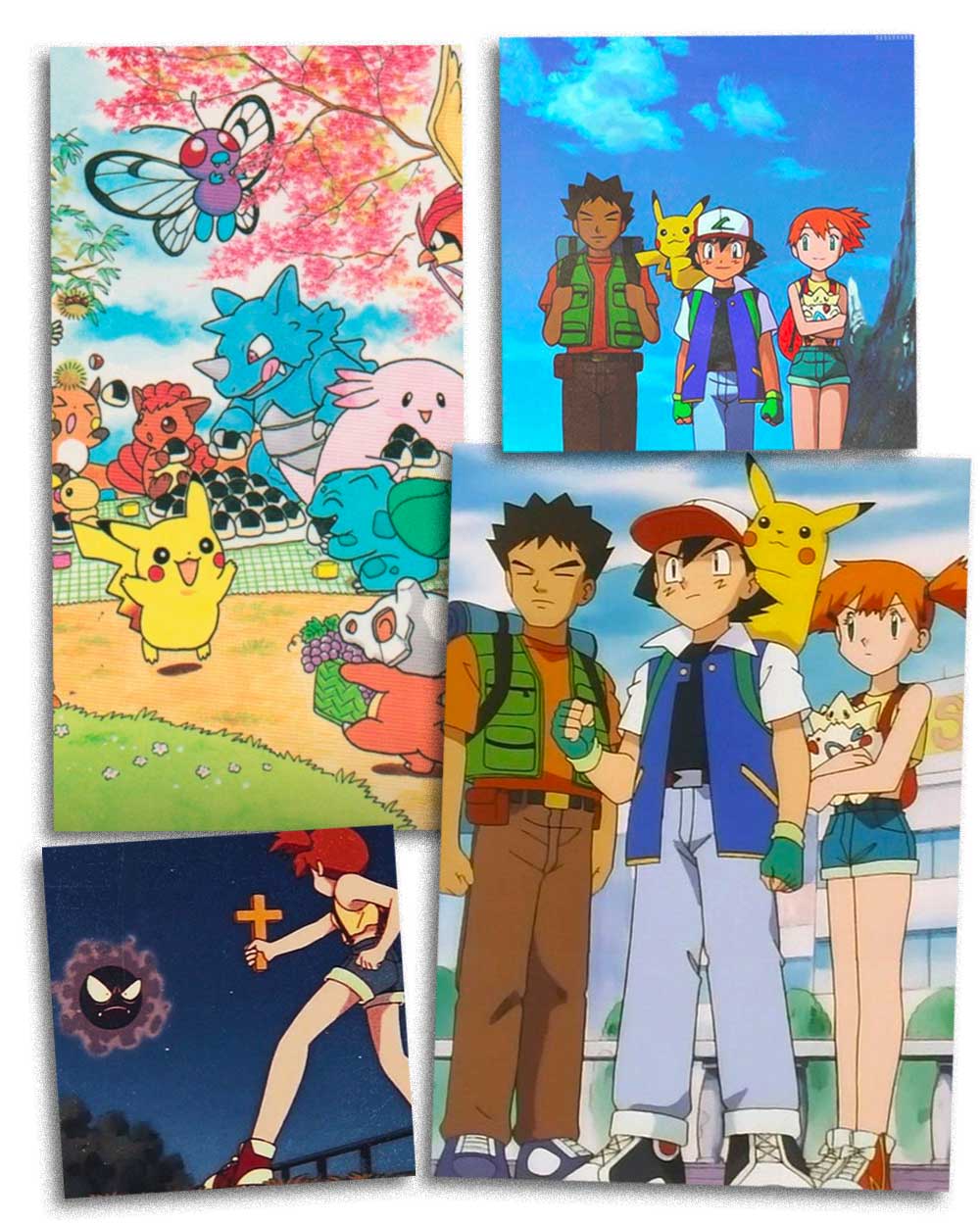 Pokemon is another quintessential anime with considerable influence in the 90s decade regarding its impact on fashion, style, and overall aesthetics.

Like Sailor Moon, Pokemon was one of the first anime series to gain widespread popularity in the West.

Characterized by a world of unique characters that later on achieved iconic status, such as Pikachu, Pokemon embodies the most playful and imaginative spirit of the 90s era.

The influence these five 90s animes (and many more) had on the fashion industry to the current times can be seen in the popularity achieved by streetwear brands such as BAPE and Hysteric Glamour.

Shoichi Aoki, a Japanese photographer and creator of the magazines STREET, TUNE, and FRUiTS, explains: 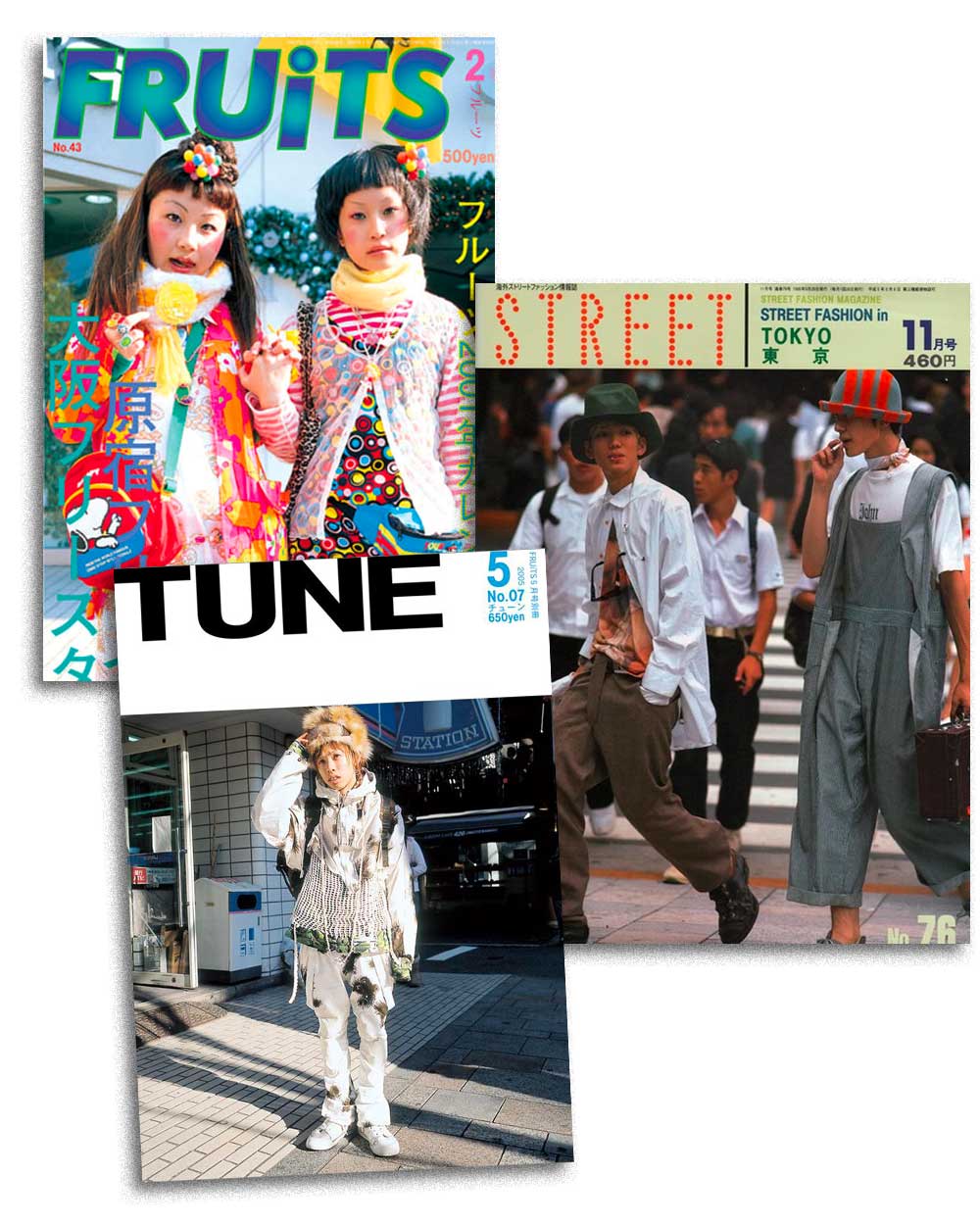 Heavily influenced by anime and manga, Japanese streetwear and street fashion reached peak popularity during the 90s and, in return, impacted fashion and street styles worldwide.

Moreover, it was not just fashion impacted by the 90s anime aesthetics but also the beauty and makeup trends of those times. 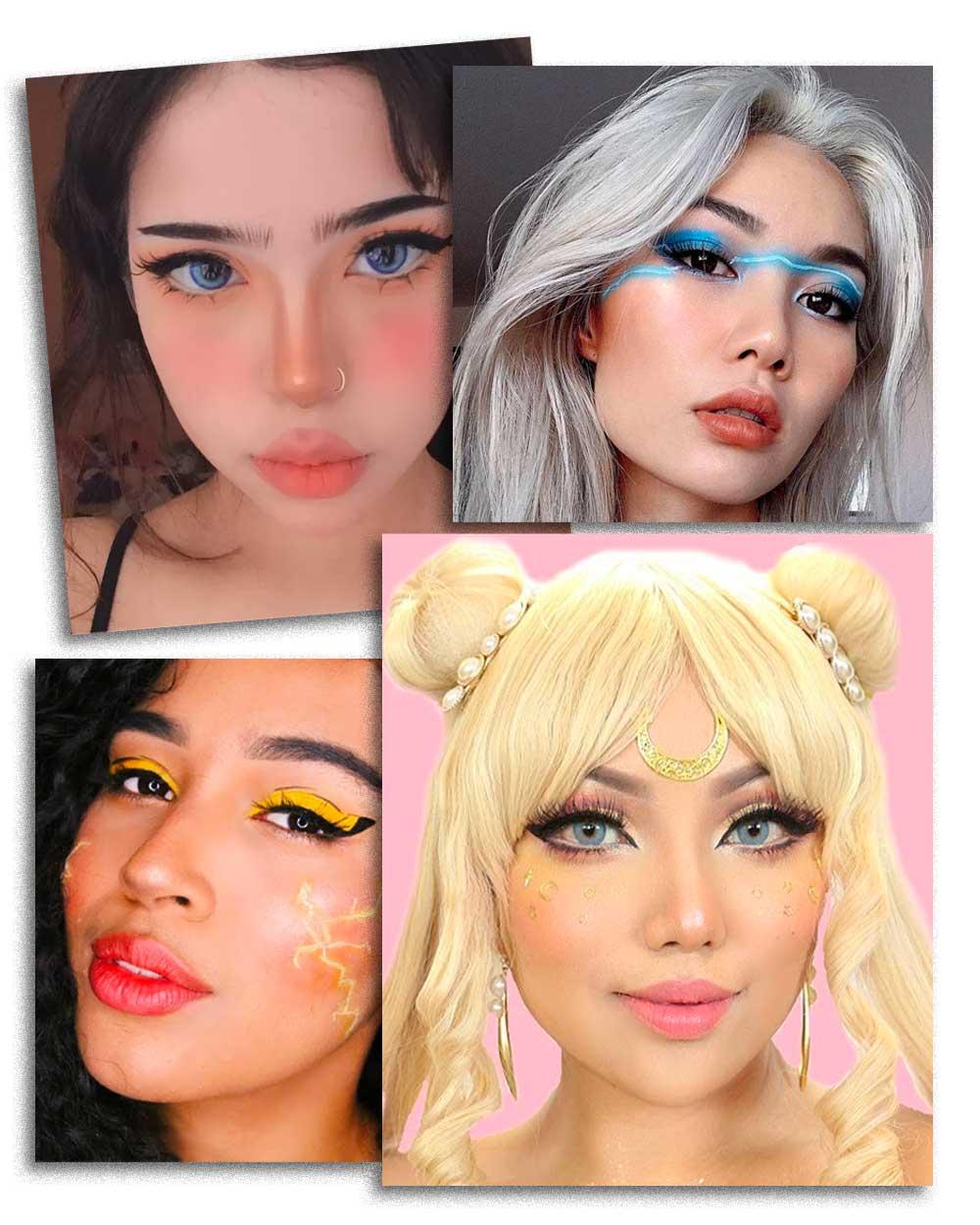 These anime aesthetics reflect in J-beauty with mascara, lipstick, and makeup accents to emphasize the size and details of the eyes, lips, and facial features.

According to Kodo Nishimura, an LGBTQ-supporter Japanese makeup professional:

“The big eyes and small mouths of 1990s anime characters influenced Japanese makeup trends with many women opting for a doll-like appearance.”

The large eyes and tiny mouths of anime characters became a makeup trend in Japan during the 90s, influencing worldwide beauty trends today.

The following section of the article will break down some of the most popular 90s anime aesthetic elements you can also employ to improve your makeup and style.

Contemporary 90s anime outfits feature a mix of styles and genres, such as combining streetwear with aspects of traditional Japanese clothing aiming to express individuality. 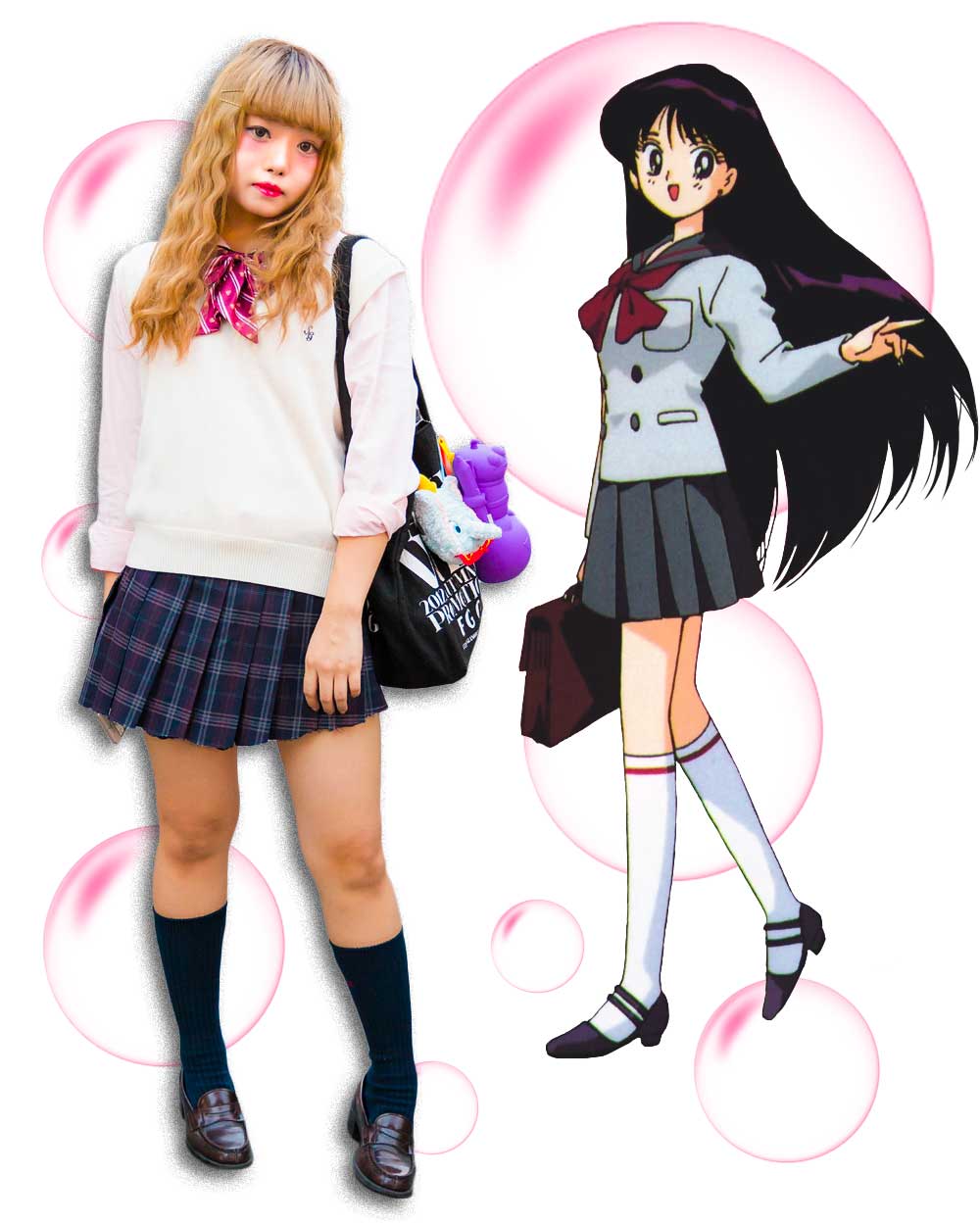 Designed to be practical, comfortable, and easy to wear, the Japanese school uniform symbolizes the discipline and respect valued in Japanese culture. 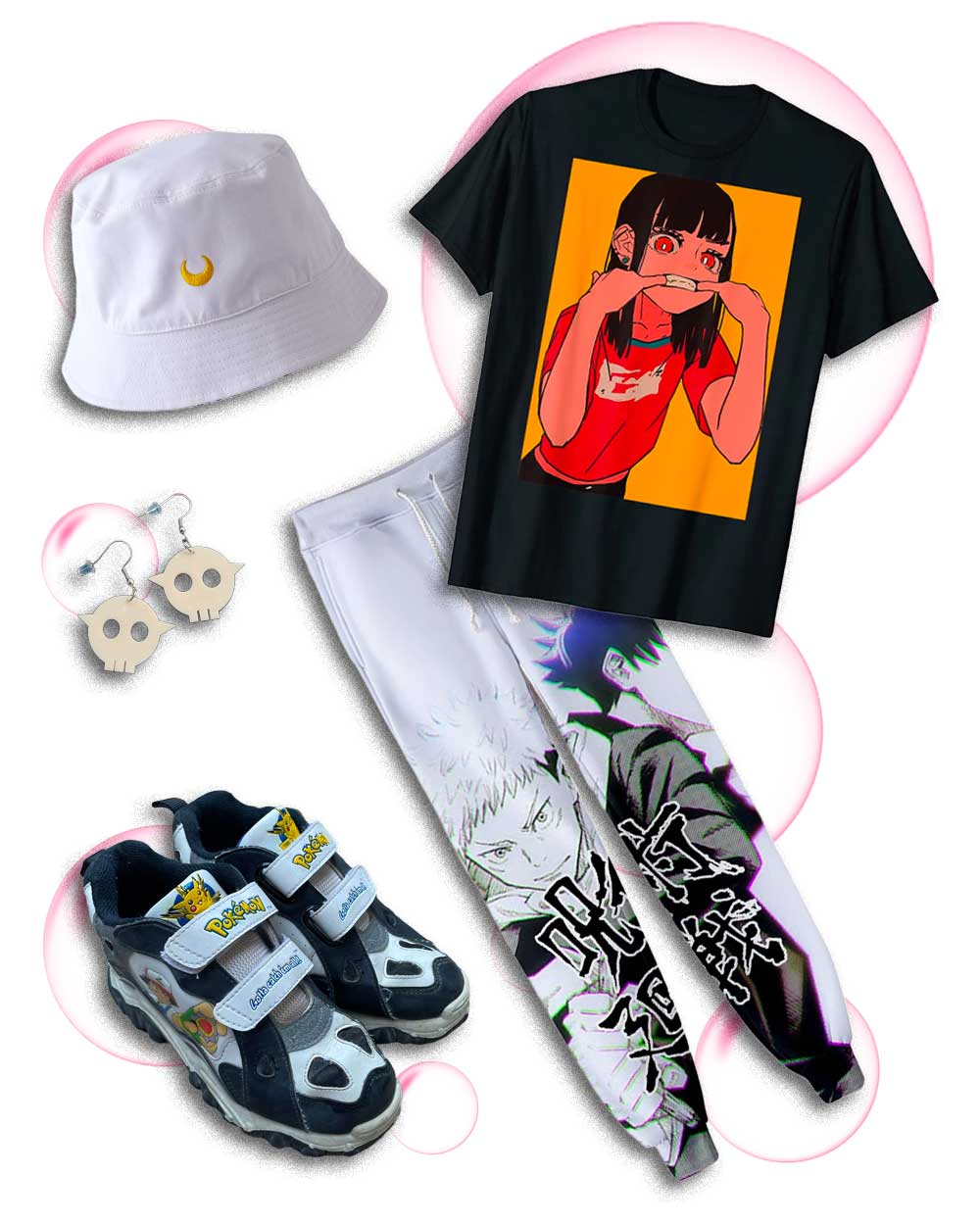 The most effective 90s aesthetics – as seen printed on hoodies, jackets, and accessories or adapted into anime, films, and video games – comprise stylistic elements from popular anime series.

Some of the most used printed anime characters in fashion are “Naruto” by Masashi Kishimoto, “One Piece” by Eiichiro Oda, “Dragon Ball” by Akira Toriyama, “Death Note” by Tsugumi Ohba, and “Fullmetal Alchemist” by Hiromu Arakawa. 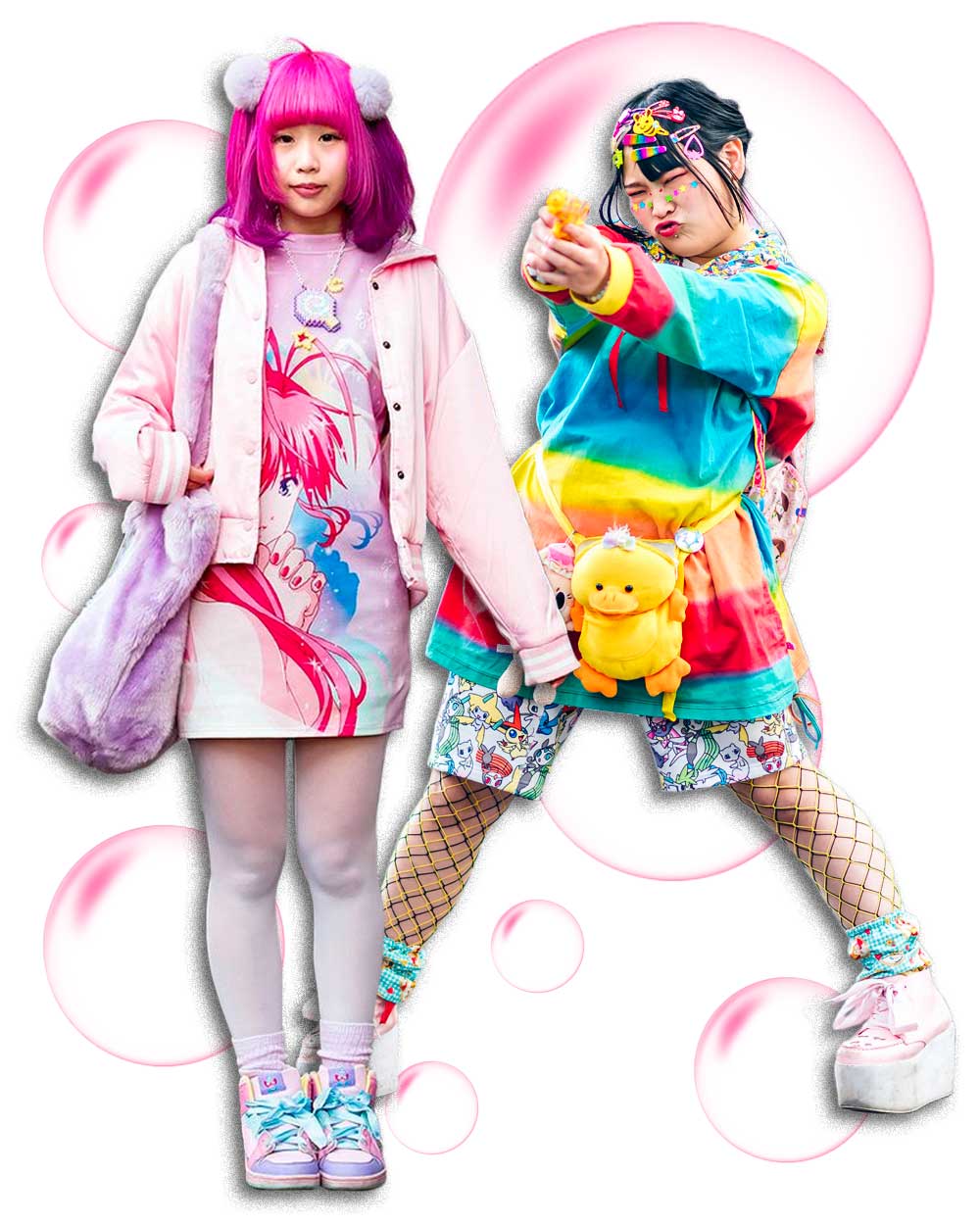 As a fashion trend that originated in the Harajuku district of Tokyo, Japan, in the 1980s and 1990s, Harajuku style is characterized by a mix of punk, goth, and kawaii (cute) fashion. 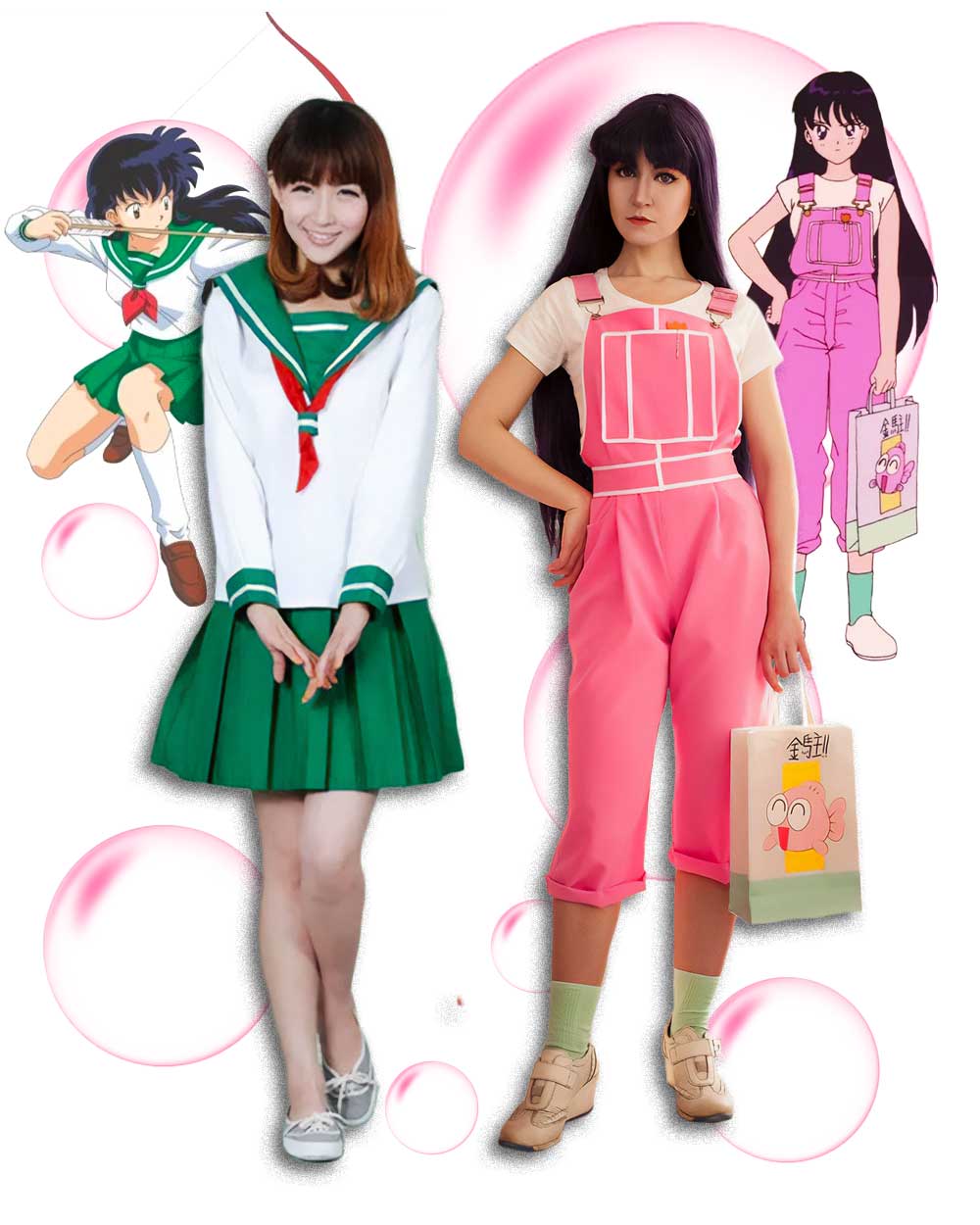 Inspired by the anime industry, cosplay is a style of costume play in which individuals dress up as characters from anime, manga, video games, and other forms of popular culture.

The term “cosplay” is a portmanteau of the words “costume” and “play” and originated in Japan, where it has been popular for many years.

Japanese Cosplay style, also known as “kosupure” in Japanese, is highly detailed and accurate, emphasizing replicating the intricate costumes and accessories worn by characters in anime, manga, and video games.

In her book “Adult Manga: Culture and Power” author Sharon Kinsella explains that Japanese anime and manga had a profound impact on fashion, particularly in the use of semi-sexual colors, cuts, styles, and graphic designs.

One of the most iconic examples of this influence is the popular anime series “Sailor Moon,” depicting colorful and flashy outfits that become representative of the 90s pop culture, impacting countless fashion collections and runway shows.

With bold colors, graphic designs, and exaggerated facial expressions, the anime of the 90s has left a lasting impression on contemporary fashion and clothing.

Which one of these 90s anime aesthetic ideas is your favorite?

Which 90s anime themes do you think we’ve missed and should include in our next article update?